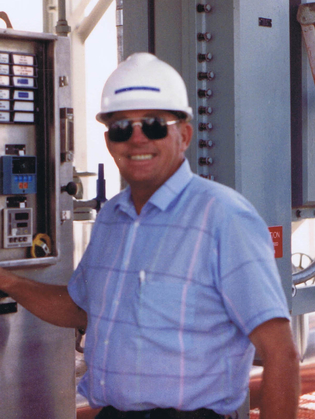 Wylie Worthington, cherished and loved by all, died on June 16, 2020 in Abilene, Texas. He was 83 years of age. A Celebration of Life will be held on Saturday, June 27, 2020 at 3:00 pm at The Hamil Funeral Home, 6449 Buffalo Gap Road in Abilene, Texas. Rev. Mike Harkrider will officiate. A reception will immediately follow the service at the funeral home. Wylie was born to Archie and Quilla Worthington in a farmhouse of his grandparents in Stonewall County. He went to school in Aspermont, and graduated from High School in Rotan, Texas where he immediately began employment in the oil field for the next 37 years, working for Northern Natural, Transwestern, and Enron and WW Pumping. He married the love of his life, Donna Elydess Hale on March 1, 1957 and celebrated 63 years of a long, enduring love. They had three children. Donna survives him and resides in Abilene, where their oldest son Mark Worthington and his wife Karen reside. He is also survived by his daughter and son-in-law, Peggy and Greg Krantz of Roswell, New Mexico and his youngest son and daughter-in-law, Lane and Tammy Worthington. He has 8 grandchildren and 16 great-grandchildren. His parents preceded him in death, along with his older brother, Hugh Worthington, and a younger brother, Shannon Worthington. Three siblings survive him, Calvin Worthington and his wife Bettye of Ft. Stockton, Texas; Necie Robertson, and her husband, Doyle of Aspermont, Texas; and Vance and Kaye Worthington of Ozona, Texas. Wylie had a strong and lasting faith and served as a deacon in the First Baptist Church and later was granted deacon emeritus in 2013 for his service. He volunteered on many boards and programs, cooked at a deer camp for his friends for many years, but his passion was working with the Baptist Men Feeding Team that fed victims of natural disasters. He was known for his bountiful gardens and intricate carvings, golfing and his mad domino skills. However, he suffered a debilitating stroke in 2012 that changed his life choices until his death but he faced the challenge bravely and with grace, carried forward for the next 8 1/2 years by his Savior, his wife, his family and his friends, many care-takers, nurses, and Hospice for which we are all grateful. In lieu of flowers, the family request that if you're so inclined, plant a rose bush and tend it well or donations can be mailed in his honor to Bloys Encampment, in care of Macie Watts, 125 Bluebriar Lane, Buchanan Dam, Tex 78609. Online donations can also be made at bloyscampmeeting.org/donate/.
To order memorial trees or send flowers to the family in memory of Wylie Worthington, please visit our flower store.