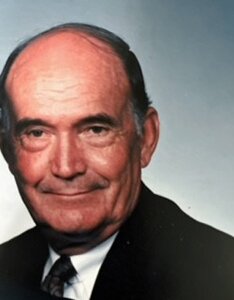 Wendell McInroe, 90 of Abilene, Texas, passed away on October 6, in Big Spring, Texas.

Funeral Services will be held at 10:30 am on Wednesday, October 12, at The Hamil Family Funeral Home. Burial will follow at the Texas State Veterans Cemetery at 2:00 pm.

Wendell was born in Idalou, Texas, to Arthur and Cornelia McInroe, August 13,1932. He attended Levelland High School.  He also received his degree in Education from Texas Tech University.  He married Glenna McInroe, June 10, 1952. Wendell was an Elementary School Principal, farmer, and rancher. He was a veteran and served in the Army.  He was a lifelong Christian and was a member of The Oldham Lane Church of Christ.

Wendell was preceded in death by Glenna McInroe.

The family of Wendell McInroe wishes to extend our sincere thanks to Parkview Nursing and Rehabilitaion for the love and care of our dad.

To order memorial trees or send flowers to the family in memory of Wendell Kay McInroe, please visit our flower store.