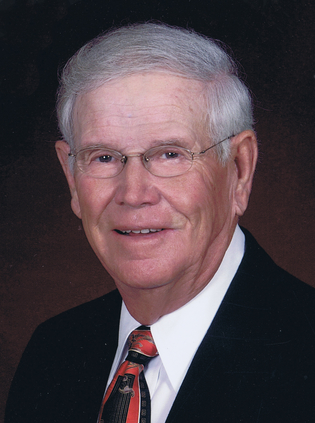 Warren Goldsmith, age 90, came face to face with his Lord and Savior, Jesus Christ, on Tuesday, May 26, with family by his side. Memorial services will be held at 2 p.m. Saturday, May 30, 2020 at the First Baptist Church with Dr. Phil Christopher and Dr. Jeff Reid, officiating. Services are under the direction of The Hamil Family Funeral Home, 6449 Buffalo Gap Road. Warren was born in Abilene on February 17, 1930, the youngest of five children. He attended Abilene schools and graduated from Hardin-Simmons University in 1952. He served our country, in the Army, during the Korean Conflict. His plans for a business career were cut short when his father died in an explosion at Goldsmith Produce Company. He and his brother James took over the family business. He was a man of the highest integrity with a tremendous work ethic. His word was his bond. On October 23, 1965, he married Sara Featherston Miller, a young widow with two small children, bringing his daughter Tammy into the family. They discovered a love for all things old, buying the Bacon home at North 5th and Mulberry and restoring it. Warren had a knack for fixing anything. After 10 years, the next home was at 860 Amarillo, and it was a huge undertaking. After 18 years, a garden home looked very appealing. He was an avid golfer and played four or five times a week until diabetic neuropathy ended his days on the golf course. He was a member of Diamondback Golf Club, former member of Abilene Country Club, a 32nd Degree Mason and a longtime member of First Baptist Church where he served faithfully as a greeter and on several committees. He shared a dream with David Leyerle to start the ministry of City Lights. He and other church members labored to make the building what it is today. He also worked on the Eunice Chambless Hospitality House at the Middleton Prison Unit. Warren was preceded in death by his parents Mathew and Eula (Gilbreath) Goldsmith; by two brothers, James Goldsmith and Carroll Goldsmith, and two sisters, Louie Faye Grounder and Eudera Higgins; also nephew Stanley Goldsmith and niece Cindy Goldsmith. Those who are left to remember and cherish the many memories, are the love of his life, his wife of 54 years, Sara; two daughters, Cindy Hood and husband Howard of Spring, Texas and Tammy Perkins and husband Jeff of Amarillo, Texas; one son, Randy Miller and Rebecca of Monett, Missouri; nine grandchildren, to whom he was Papa, Hunter Hood, Whitney Waggoner, Camille Waggoner, Dayly Ginnings, Kari Jay, Caitlin Miller, Kelsee Norton, Abbie Booher, and Emily Miller; ten great grandchildren, who were the joy of his life, and a host of nieces and nephews. In lieu of flowers the family suggests memorials may be made to City Lights Ministry at First Baptist Church, 1333 3rd Street, Abilene, Texas 79601. The family of Warren Goldsmith wishes to extend our grateful thanks to Dr. Joseph Crumbliss and staff who took such compassionate and prayerful care of him for many years, and to Dr. George Dawson and nurses from Hospice of The Big Country.
To order memorial trees or send flowers to the family in memory of Warren Gibson Goldsmith, please visit our flower store.