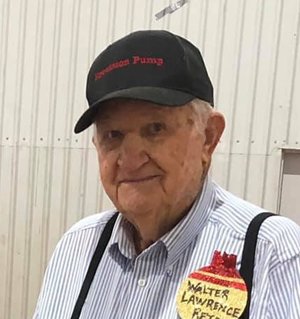 Walter was born and raised in Oplin, Texas, where he graduated from Oplin High School.  He continued his education at Tarleton State University and finished at Texas A&M where he got an Agricultural Education degree in 1951. He was proud to be an Aggie, “Gig’em.”  Walter worked as a teacher. He served in the US Army during WWII and was stationed in Japan.

In the early 1970s, he built his business, Mobile Labs, from the ground up. He owned and operated the business until he passed the reins to his son in 1997, when he retired to the Ranch with the love of his life, Wilma “Sissie” Saunders.  They loved raising their cattle and watching their goats when they weren’t off traveling the world. He enjoyed spending time with his family and friends.

He was preceded in death by his father Walter E. Reid; mother Lela Armor Reid; sister Edith; brothers Gerald, Max and Manton; and the mother of his children, Betty Carmack Reid.

He is survived by son Stephen and wife Tonya Reid of Odessa; granddaughter Gwendy and husband Scott Everett of Odessa; grandson Russell and wife Felicia of Odessa; daughter Leann Lewis of the Metroplex; sisters-in-law Lenora and Ida Reid both of Lawn; great grandchildren Kory, Haylee, Piper, Delilah and Romeo, as well as several nieces and nephews.

Memorials may be given to your favorite charity.

To order memorial trees or send flowers to the family in memory of Walter Lawrence Reid, please visit our flower store.