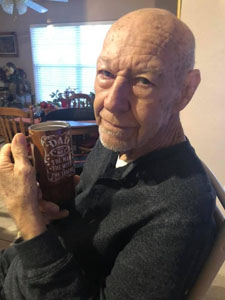 Vernon Lee Allen was born to Lester Lee Allen and Elsie Zadie Blankenship Allen on July 23, 1940, in Abilene, Texas. He attended grammar school at Elmdale and later transferred to Wylie. He graduated from Wylie in 1959. In high school, Vernon played football, basketball, and ran track. His love of sports excelled in his ability to play basketball. He met Patricia (Pat) Lang at the Metro Theater in Abilene his sophomore year, and they married shortly after high school graduation. Vernon worked primarily as a welder at West Texas Iron Works, West Texas Fabricators, and finally at Lockheed Martin. In 2003, Vernon had a massive heart attack and received a heart transplant in 2005. This gave him the opportunity to enjoy life with his wife, children, and grandchildren until kidney failure in 2018. Even through all his adversities he kept his sense of humor, always being the prankster. Vernon found his new home in Heaven on September 19, 2021, one day after he and Pat celebrated their 62nd wedding anniversary. In the days before his passing, he was heard many times saying, "What a life." He is survived by his sister, Valda DeShazo; his wife, Pat and three children, Kelly (Jon) Bain of Palestine, TX, Ron (Gwen) Allen of Tuscola, TX, and Greg Allen of Portor, TX. He is also survived by seven grandchildren who were the loves of his life: Amber Bain, Cameron (Katy) Bain, Kristin Bain, Paige Bain, Ashley (Lance) Huston, Haylee (Byron) Rogers, and Blake Allen; 11 great-grandchildren also survive him, as well as numerous nieces and nephews. Funeral services will be Friday, September 24 at Beltway Park Church – North Campus under the direction of The Hamil Family Funeral Home. Visitation will start at 1:00 pm at the church, followed by services at 2:00 pm officiated by Lance Huston and Byron Rogers. Burial will follow at Abilene Municipal Cemetery. Pallbearers will be Ron Allen, Greg Allen, Jon Bain, Blake Allen, Byron Rogers and Lance Huston. Honorary pallbearers are Glen Lang, J.W. Gray, Harlos Guyton, Sonny DeAnda, and George Gurganus. In lieu of flowers, donations may be made to the Beltway Church Food Pantry at 4009 Beltway South, Abilene, TX 79606, or to West Texas Rehab Center at 4601 Hartford St., Abilene, TX 79605.
To order memorial trees or send flowers to the family in memory of Vernon Lee Allen, please visit our flower store.