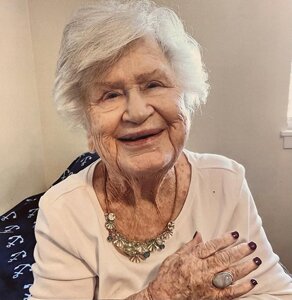 Birdie Sue Worthington Carter, also known as Dona Sue to many in Brazil, passed away peacefully on Friday, October 14th, 2022, with her family at her side.

She was born in Winters, Texas, on October 17th, 1929, to Thomas Howard Worthington and Birdie Wood Worthington. It also happened to be the date the stock market crashed, so for the first 10 years of her life, all she knew was the Great Depression.  In her book, “Two Countries, Two Families, One God,” she said that although they didn’t have things, they did have family.  Her father was a hardworking man, and her mother was a strong, quiet woman.  She accepted the Lord as her Savior at a young age, and there is no doubt that He was ever present throughout her life.  Even though her parents hadn’t completed high school, they were self-educated and knew the value of an education.  Her first few years of school were in a one room rural school, first through seventh grades all together.  When she completed high school, her parents moved into town while she went off to college.  She later realized that the farm was sold so that she could go.  When she confronted her father, he told her that the most important thing a parent can give their children is to raise them well and give them a good education.  She took this to heart.  She started college at Hardin Simmons University and finished up at the University of Texas with a degree in what today would be known as communications.  After finishing her degree, she was offered a job by then Senator Lyndon Johnson.  After praying about it, she declined and ended up taking a job as educational secretary at the First Baptist Church in Abilene, Texas.  She met Jimmie Dale Carter soon after at her friend Margaret William’s wedding to Dale’s brother Forrest.  She served as maid of honor because the original maid of honor had the measles, and she was the only one that could fit into the dress.  He was the best man, and they fell in love. He had felt the call to be a missionary, and she felt the same. In 1957, they were appointed to be missionaries by the Southern Baptist Foreign Mission Board in Brazil.  After a year in language school in Campinas, Brazil, off they went to Corrente, in the arid northeastern state of Piaui.  There, this quiet, shy but determined child from Winters, Texas, found her true calling.  Here she continued her legacy of the importance of education in changing people’s lives.  There were many things she did because there was no one else and it needed to be done.  She played the piano in church and even weddings, as she did for her best friends Sonia and Helio Paranaguá.  She sang duets.  She taught Psychology and Sociology in the Normal School at the Instituto Batista Correntino, using textbooks her sister Doris sent her from Hardin Simmons University to create the lesson plans.  She became a ham radio operator so that she could talk to her children who were attending college in the US, because there were no phones.  She had a radio program called “Momento de Paz” (moment of peace); everyone in town loved it for its simple Christian message, no matter what religion they followed.  She was a strong Christian woman, known for her professionalism, smiles, and conviction that education was the best path forward. Stories abound of families who arrived with little more than a hunger for learning and whose families and extended families now are lawyers, doctors, educators, politicians, pastors, and more.   Many came to know the Lord through this lived testimony.  She is well remembered by everyone as always prepared, humble, ready with a quick smile, always sharply dressed.  Sue and Dale retired from missions after 37 years in Brazil and continued to serve the Lord, being involved at FBC in Abilene, even organizing an FBC choir trip to visit the Corrente Baptist Church in Brazil.  She will be missed greatly, not only by her immediate family but by the many lives that she touched.

Combati o bom combate, acabei a carreira, guardei a fé. Desde agora, a coroa da justiça me está guardada, a qual o Senhor, justo juiz, me dará naquele dia; e não somente a mim, mas também a todos os que amarem a sua vinda. (I have fought the good fight, I have finished the race, I have kept the faith. Now there is in store for me the crown of righteousness, which the Lord, the righteous Judge, will award to me on that day—and not only to me, but also to all who have longed for his appearing.) 2 Timothy 4, verses 7 and 8.

Sue Carter is survived by her brothers T.H., Jr. and his wife Elizabeth, and Gary, and his wife Beverly; by her children and their families: Timothy Dale and Ivonete Carter, and their sons,  Joshua and Nicholas, and Joshua’s wife Emma; Rebecca and Walter Macedo, and their children Christian, Thais and her husband Greg, and Danielle and her husband Daniel; Joel and Renee Carter, and their children Lily, Noah and Eli; and Jonathan and Joana Carter, and their daughters Leydjenne and Ashley; her nieces and nephews; by her “adopted” children Regina and Samuel, and all the other children she helped; by her many missionary family members;  and by her many friends and colleagues in Brazil and in the US.  She is preceded in death by her husband Dale, her parents, Thomas Howard and Birdie, and her sister Doris.

A Memorial Service will be held at 11 am CST on Wednesday, October 19th, at First Baptist Church of Abilene, with Dr. Phil Christopher officiating.   The memorial service will be broadcast at www.fbcabilene.org. Burial will follow at 1 pm at the Texas State Veterans Cemetery at Abilene.

To order memorial trees or send flowers to the family in memory of Sue Carter, please visit our flower store.