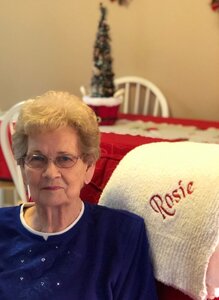 Rosie Jean Johnston Templeton, our beloved Mother, left this world on Sunday, December 5, 2021 at age 86. She was born June 15, 1935, in Ridge, Texas to Henry Elgin & Minnie Rosie Johnston. She was the youngest of six sisters, then two younger brothers - all who have preceded her in death. She was very smart, and the school kept promoting her up to higher grades.

She met Alton Toxie (Dade) at one of the local softball games after he had returned from service in WWII. They married on July 8, 1949 and settled in Easterly, Texas. Then he was called back to service in the Korean War, and their first child, Nelda, was born in 1951 while he was gone.  He returned in 1951 and their second son, Jerald, was born in 1952. He worked for the Missouri Pacific Railroad until in 1953 they moved to Haskell in West Texas to join his older brother in the oilfields eventually ending up in Abilene, Texas in 1955. Their second son, Ray, was born there in 1955. They followed the oilfields for several years in their mobile home even living as far away as Michigan. They returned to Abilene in 1963 to give their children a stable future. Their third son, Darrell, was born in 1968.

Rosie (my mother) was the perfect mother. She lived for her children. She made all our clothes, always had fresh cookies when we got home from school, and always had time to listen to anything we had to say. Mother was always involved with the PTA at our schools, and she spent many a summer hauling my brother and us around to rodeos in Texas where my brother Jerald competed.

All four of us graduated from high school in Abilene (three from Cooper, one from Wylie). Ray and Darrell graduated from Texas A&M, Nelda from McMurry, and Jerald was a Marine.  Our parents instilled a strong work ethic and were always there for us.

She volunteered at the hospital for several years when we were grown. And, she worked at the Abilene Zoo in the gift shop which she loved. She had lots of friends, and her house was always where the neighbors gathered for a cup of coffee. In fact, prior to her illness, she lived at Abilene Senior Village where we had to put a sign on her door for “All friends gather on Rosie’s Porch” because her friends loved to meet on her porch in the evenings. A special thanks to her friends – Mary Anne, Edie, Linda M, Linda E, and Kathy – for making her last years so full of laughter and friendship.

Rosie was preceded in death by her parents, her husband Dade in 1992 and her son, Ray Templeton, in July 2021.  She is survived by her daughter, Nelda Templeton Bell (Vic), and sons, Jerald Templeton (Jennie), Darrell Templeton (Sandra) and Ray’s wife, Gaylene Templeton. She is also survived by Roma Templeton, three special sister-in-laws Barbara Threadgill (Jack), Net Smith, Becky Blessington and a special niece, Jean Essman, plus lots of nieces and nephews. She had 10 grandchildren and 20 great-grandchildren, one of which preceded her in death, Harrison Hughes. She had one great great-grandchild.

Hers was a life very well lived filled with kindness and love for others. She was a true Southern lady. She is now in the hands of the Lord joining my Daddy, my brother Ray, her grandchild Harrison.  We will miss her greatly!

A very heartfelt thank you to Dr. Jim Purpura who guided us during these last days and tried so hard for our Mother.  Also, a special thanks to her nurses Martin & Kevin at Hendrick South, and to Hendrick Hospice and their superb staff, especially her nurse Mary.

At her request a graveside service will be at Potosi Cemetery on Saturday, December 11, 2021 at 1:00 pm.

The graveside is available to watch at: https://online.brushfire.com/dts/hamilfamily/gq2gw4nd9j

To order memorial trees or send flowers to the family in memory of Rosie Jean Templeton, please visit our flower store.