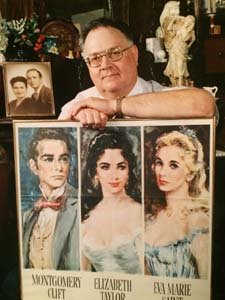 Robert Evans Holladay of Abilene, Texas took his last breath on December 2, 2019.  Visitation will be 5:00 PM to 7:00 PM on Saturday December 7th at The Hamil Family Funeral Home.

Funeral services will be held at 2:00 PM, Sunday December 8th at his beloved Paramount Theatre in Abilene, Texas.  Burial will follow at Potosi Cemetery.  Services are under the direction of The Hamil Family Funeral Home, 6449 Buffalo Gap Road.

Robert Evans Holladay was born in Big Spring, TX to Victor Emanuel Holladay Sr. and Jewel Taylor on May 22, 1940.  He graduated from Hardin-Simmons University in Abilene, TX with a B.A in English and History.  He then earned his M.A. in both English and History from Southern Illinois University.  Mr. Holladay was a scholar with a vast knowledge of literature and film.  His passion was sharing this with his family and students and helping them gain a deep desire to seek knowledge.  Mr. Holladay inspired thousands during his 42 years of teaching Honors British Literature, Honors World Literature, and Journalism (yearbook) at Cooper High School in Abilene, TX.  Mr. Holladay also instructed numerous classes for 30 years at McMurry University.  This included the Film and Literature classes that were highly coveted.   He also instructed in Literature and composition at Embry Riddle Aeronautical University.  He was the Film Director for the Paramount Theatre from 1973 to the present, including the development of the upcoming 2020 series.  Teaching, family and the Paramount where great passions for Mr. Holladay.  In living his dream and inspiration others he has been recognized in more ways than can be listed.  Some of these include:  HSU’s distinguished Aluma Award, Cooper High School’s Ring of Honor, The Pioneer of the Millennium Award (Abilene Reporter News), Outstanding Contribution to the Arts Award (The Abilene Cultural Affairs Council), many teacher of the year awards (Cooper, McMurry, and Embry-Riddle University), The Texas Excellence of Outstanding High School Teachers Award, Texas State House Bill 399 (2006), and many more.  The recognition he loved was the continued friendships with former students and Paramount film patrons.

Robert Holladay was preceded in death by his parents, Victor and Jewell Holladay and his brother Victor Emanuel Holladay Jr.

Pallbearers will be Theron “Robert” Holladay Jr., Ian Holladay, Lavone Crosby, Jay Lester, Tim Taylor, Jacob Reynolds, and Jared Reynolds.  Honorary Pallbearers include Joe Anderson, all of Mr. Holladay’s former students, all past members of the classic film society, and all friends of the Paramount.

Robert Holladay would be honored for any memorials to be given to his beloved Paramount Theatre in Abilene, TX.

To order memorial trees or send flowers to the family in memory of Robert Evans Holladay, please visit our flower store.