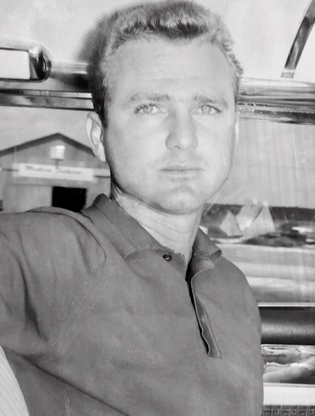 Born in Abilene during the Great Depression, Rex was the fourth of six sons born to Lamar Hilliard and Dixie Moore. On September 9, 1932, Dr. Luther Pickard walked over from the West Texas Baptist Sanitarium to deliver Rex Bell Moore at the family home on North 21st Street. Rex lived most of his 89 years in Abilene. His parents moved the family to 750 Ross Street and from there Rex walked to school at Alta Vista, regularly accompanied by friend Dan Winters. And, when a military plane crashed, only yards from the school on South 11th in 1944, Rex was among the group who raced out to gawk and pick up souvenir bits of the wreckage. By the time he was twelve, he had a newspaper route (back when the paper had to be placed between the screen and front door), he washed dishes at the Dixie Pig, and stocked groceries at the Safeway on Chestnut. An early goal in his life was to sneak onto the roof of every downtown building, something he and his friend Denver Austin worked at diligently and with varied success. Rex attended high school at Texas Military Institute in San Antonio where he quarterbacked and captained the TMI Panthers. He next managed to attend eight colleges in four years, playing football at most, before graduating from Hardin-Simmons with a degree in geology - and through an administrative kindness excusing his scant chapel attendance. In the 1950s, Rex worked in the family business, Moore & Moore Drilling, where he learned problem solving the oilfield way. Roughneck, tool pusher, driller and "a good hand" were all badges he wore proudly. He attended American Flyers in Ft. Worth, earning his instrument rating and flight training certifications. A good day was any day he could take the company's V-tailed Bonanza on a flight. One of the worst days of his life occurred in June of 1957 when he lost his brother and closest friend, Jay "Jake," in a plane crash in New Mexico. It was a defining moment in Rex's life. Rex married Beverly Adams in 1958, in the living room of his parents new home on Tanglewood, and adopted her son Mark. They added to their family with Lisa, Jay and Denise. In 1968, a son, Matthew Zane, was born but lived only hours. Along with his dad and brothers, Rex entered the retail business in the 1960s as a franchisee of Gibson's Discount Stores. The Moore brothers operated locations mostly in west Texas but also one store in Santa Fe, New Mexico, where the family lived from 1967 to 1972, before returning to Abilene. However, Santa Fe forever remained a source of contentment. Rex had a varied business career - drilling superintendent, store owner, stock broker, home builder - and was always proud to have been his own boss. He lived with a strong sense of self-discipline, was a competitive handball and squash player and a committed daily jogger, a habit he began well before it was a common form of exercise. He had an aversion to doing most anything in the prescribed manner; he would turn a street early rather than idle at a red light, back into every parking spot, and although he served in the U.S. Army he managed to live off base and wear civilian clothes while proudly serving his country. In addition to Santa Fe, Rex loved Guadalajara, Mexico and relished walking the sidewalks and streets. And if he happened to pass a factory, he would walk in and ask for a tour. He also harbored a deep connection for Abilene and her people. Rex's final day was January 7th and, as he wished, occurred - just as he was born - at home. His cremains will be interred at the columbarium of the Episcopal Church of the Heavenly Rest. A memorial reception will be held February 11th at 2:00pm in Gerhart Hall at Heavenly Rest Church. Preceding him in death are his parents, Lamar Sr. and Dixie Moore, brothers Lamar Jr., Ray and Jay. He is survived by his younger brothers, Lee of Buffalo Gap and Jim of Abilene, as well as his children: Mark Moore of Houston, Lisa Ambrose of Clyde, Jay Moore of Abilene and Denise Moore, also of Abilene. He is also survived by nine grandchildren, ten great-grandchildren and twelve nieces and nephews. The family wishes to thank Visiting Angels and his caregivers Linda, Susan, Juanita, Goldie, Monica, Annie, Mickey and son-in-law Tom Ambrose for all he did to make the final months more comfortable.
To order memorial trees or send flowers to the family in memory of Rex B. Moore, please visit our flower store.

Church Of The Heavenly Rest In Gerhart Hall