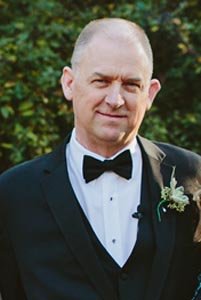 “But they that wait upon the Lord shall renew their strength; they shall mount up with wings as eagles; they shall run, and not be weary; and they shall walk, and not faint.”  Isaiah 40:31

Committal Service will be at 1:00 pm on Tuesday, February 2, 2021 at Texas State Veterans Cemetery at Abilene with arrangements under the direction of Hamil Family Funeral Home also of Abilene, Texas. Searcy Funeral Home in Enterprise, Alabama, provided loving care and transfer to Texas.

He was the firstborn of two children to G. Thane Akins and Jean Loye Locker Akins on May 1, 1958, where he was raised and educated in Midland, Texas, with the morals and values of Christian parents and the hospitality of family. Here, he would meet his future wife and lifelong companion of over 33 years, Connie Sue Miller, and these two hearts were joined on October 28th, 1988.

His career ambitions and educational opportunities allowed him to complete a B.S. in Computer Science/Software Engineering from Abilene Christian College in 1987 and a Master of Arts in Education in 2010. His patriotic love for our country motivated him to give over 21 years of honorable service in the United States Armed Forces with four years in the US Air Force as an Automatic Tracking Radar Specialist and over 16 in the US Army as an AH-64 Apache Attack Helicopter Pilot and Instructor. Upon retirement from the military, Rex continued to serve his country and Army Aviation as a contractor and as a Department of the Army Civilian creating and testing simulation programs for an extensive array of platforms at Fort Rucker, Alabama.

His love of adventure was apparent to all. He and his father shared a passion for aviation which extended outside Rex’s military service and has taken roots in his son and other family members. His skills and expertise as a mechanic were also universally known. Rex was no stranger to red sports cars and could often be found in the garage tinkering with his Trans-Am, or taking it for a joyride (sometimes a little too fast). If it could be driven, Rex could make it go faster. He could often be found fixing something in the garage, singing in preparation for leading worship at church, or at his computer researching for his extensive Bible studies and papers. His dry sense of humor will be greatly missed as well, as he was very skilled at interjecting a well-timed joke into many conversations.

As a father, he was diligent and loving. He always had time to have a difficult discussion or offer much-needed advice with any of his children at any hour. As a husband, he was devoted and romantic. Each year, he wrote beautiful poems for special occasions that were treasured by everyone in his family. As a grandfather, he was soft hearted, proud and kind. He was often teary-eyed when talking about his grandchildren, Lauren and Milo.

But the distinctive and enduring center of his life in every way was derived from his commitment and obedience to his Lord and Christian faith. Since moving to Midland at six weeks old in 1958, he and his family became members of the North A and Tennessee (Downtown) Church of Christ. In the many states and countries that the military sent him, he always found a church home where he led singing, taught classes, and shared his studies. Since 1999, he has been a member and deacon at College Avenue Church of Christ in Enterprise, Alabama. As a clear advocate of Christian education, Rex was honored to serve as a board member for Wiregrass Christian Academy for many years. In his early years, many will remember his trained tenor voice in wedding and funeral choruses. His love of music was a pathway of peace throughout his life. He was the embodiment of Christ’s words from Luke 12:48, describing a servant’s responsibility, “For unto whomsoever much is given, of him shall be much required.”

We would like to thank Dr. Kasserwani; Dr. Florian Eichler; Dr. Dalati; Dr. Reynolds; Mike, Traci, and the Kindred Home Health team; Daysprings Hospice; Center Home Health; and the many healthcare providers that helped on this difficult journey. A bonded love that is shared, endears all who may know it, and when encountered, will it abide from within and be forever cherished.

Although we will not see him as we go on with our walk of this earth, he will continue to be with us everywhere we look.

To order memorial trees or send flowers to the family in memory of Rex Thane Akins, please visit our flower store.