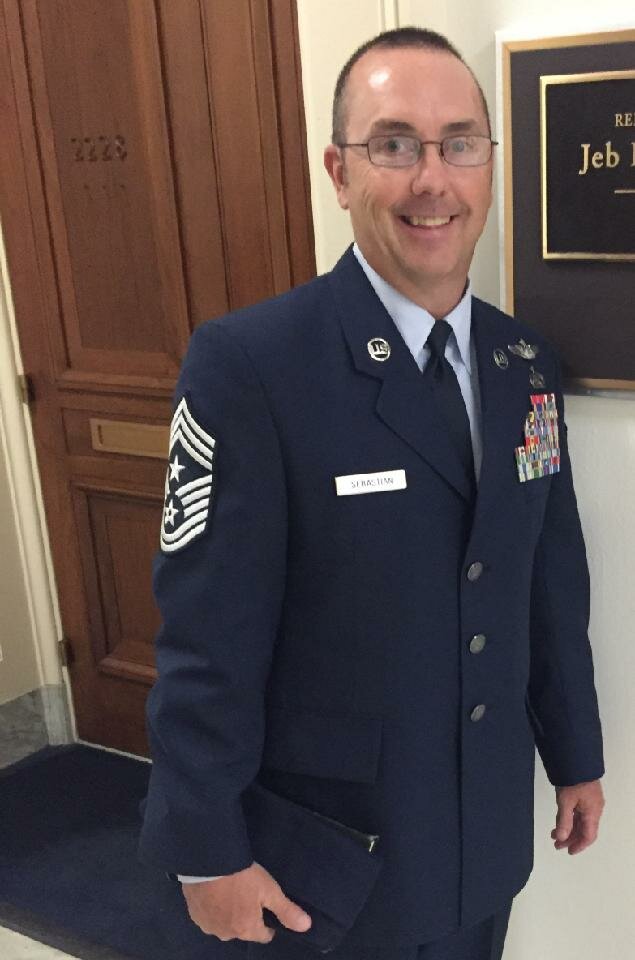 Jarrod Sebastian, 54 of Dallas Texas, passed away on November 8th in Abilene Texas.

Jarrod “Seabass” Sebastian was born in Dallas Texas to James Earl Sebastian and Janet Mckenzie on 08/10/1968. He  graduated from North Mesquite. He received a Bachelor of science degree in Business Administration, A Master of Arts in Education, Teaching and Instruction from Trident University. He was married to Natasha Sebastian on February 22nd 1999 in Baltimore, Maryland. He worked as a supply journeyman, Loadmaster and lastly a Command Chief for the United States Air Force for almost 30 years. He was awarded the Legion of Merit with 1 oak leaf cluster and the Bronze star along with numerous medals to name a few. He was involved in many clubs and organizations to provide service to others. He received an honorary membership from the Rotary Club of Nashville-Berrien on the 17 of May 2018.

Jerry is preceded in death by his father James Earl Sebastian, Father-in-law, Danny Stanfield and his beautiful grandmother Granny Watson whom he adored.

He is survived by his wife, 3 sons and dog, Natasha Sebastian, Ian, Isaac, Isaiah and Koda. Mother-in law and her lifelong partner, Fiona Stanfield and Michael Kendray, brother-in law, wife and daughter, Nathan, Janell and Aleya Stanfield, Brother and his wife Jeff and Cynthia Sebastian. His nephews Donnie and Dorrie Sebastian, Cousin and his wife and dog Chris, Dawn and Henry Little. Stepmother Scelena Sebastian, Mother and stepfather Janet and Ed Mckenzie.

Memorials will be given to the Texas Oncology Foundation.

The family of Jarrod and Natasha Sebastian wishes to extend our sincere thanks to Texas Oncology, Hendrick Hospice Care, Veterans Affairs, The Hamil Family Funeral Home, Merkel High School, The Wallers & The littles and numerous friends and family that are endless names to list for all the support, donations.

To order memorial trees or send flowers to the family in memory of Ret. CMSgt. Jarrod Duane Sebastian, please visit our flower store.