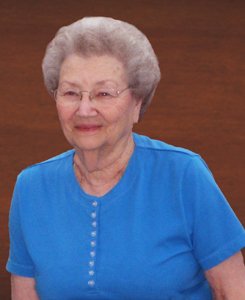 Reba Osborne Wheeler, 92, longtime resident of Abilene, passed away Friday, September 18, 2020. A memorial service will be held at 11:00 am on Thursday, September 24, 2020 at St. Paul United Methodist Church. Rev. Steve Patterson will officiate. Interment will be private. Services are under the direction of The Hamil Family Funeral Home, 6449 Buffalo Gap Road. Reba was born October 29, 1927 to Mr. and Mrs. Ralph B. Osborne in Winters, Texas. She attended and graduated from Winters High School in 1945 and attended Draughns Business College in Abilene. On September 4, 1948, Reba married James H. Wheeler in Winters. Reba has been active in St. Paul United Methodist Church where she was a member of the Propheteers Class for almost 60 years. She also sang in the choir for many years. She is survived by her husband, James Wheeler, of the home; her son, Mickey Wheeler and wife Linda, of Irving; her daughter, Paula K. Schanbacher, of Dallas; one grandson, David Wheeler and wife Tina, of Flower Mound; two great-granddaughters, Lauren and Ellie Wheeler, also of Flower Mound. Reba is also survived by many cousins, nieces and nephews. She was preceded in death by her parents; her brother, Ralph B. Osborne, Jr.; her sister, Maurine Davis; one niece, Martha Davis, and one nephew, Ralph B. Osborne, III. Memorials may be made in honor of Reba to St. Paul United Methodist Church, 525 Beech St., Abilene, TX 79601; or to the Texas Lions Camp, P.O. Box 290247, Kerrville, TX 78029.
To order memorial trees or send flowers to the family in memory of Reba Osborne Wheeler, please visit our flower store.