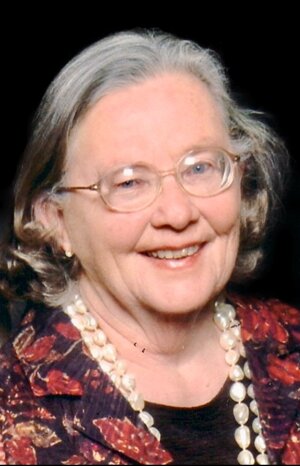 Soli Deo Gloria! Peggy Hardaway Pattillo Beckham passed away peacefully at her home on December 29, 2021, at 87 years of age. A memorial service celebrating her life and inurnment at the church columbarium will take place at 11 AM on Saturday, February 19, 2022 at the Episcopal Church of the Heavenly Rest. A reception/visitation will follow the service at the church in the Gerhart Hall. Services are under the direction of The Hamil Family Funeral Home, 6449 Buffalo Gap Road.

Peggy was born January 26, 1934, in Abilene, Texas, the daughter of Evelyn Ruth (Jackson) and John Fletcher Hardaway.  She graduated from Abilene High School in 1952 and received her B.A. degree in Plan II in 1956 from the University of Texas-Austin where she was elected to membership in Phi Beta Kappa.  In 1975, she received a M.A. degree in Literature from Hardin-Simmons University and was awarded an honorary Doctorate in Humanities in 1990 from Hardin-Simmons University in recognition of her service to the community.

Peggy married her high school sweetheart Guy Robert (Bob) Beckham on November 10, 1956.  Their wedding was the first held in the newly built sanctuary of the Episcopal Church of the Heavenly Rest.  Other than the few years Bob spent in the military, the couple made Abilene their home and were active in community affairs.  In addition to serving on numerous Abilene non-profit Boards, Peggy was elected to the AISD School Board, serving from 1976-1982. She was instrumental in starting Hendrick Hospice Care which began in 1982 as Hospice of Abilene. Peggy was a founding Board member of the Community Foundation of Abilene in 1985 and served as Board Chair from 1990-92.  In 1995, the Chamber of Commerce recognized Peggy as Abilene’s Outstanding Citizen.  In 2015, she was the recipient of the Pro Bene Meritis Award, the highest honor bestowed by the College of Liberal Arts at the University of Texas. An avid Longhorn and sports fan, she greatly enjoyed cheering on all of her beloved UT teams.

The two main anchors in Peggy’s life were her family and her church.  As a family, much time was spent on the Spring Gap Ranch in Callahan County where she and Bob would hold an annual deer hunt for the young men of Ben Richey Boys Ranch.  Peggy was a lifelong member of the Episcopal Church of the Heavenly Rest where she served on the Vestry, was a lay reader, taught adult classes,  and served on the Outreach Program to help those in need

Known as Nonnie to her grandchildren, Peggy taught them the art of birdwatching, stargazing and shared her love of poetry. She will forever be remembered for her gentle love, her kindness and her contemplative soul. Her charitable nature and quiet grace made for a lifetime of deep friendships and abiding love of her family. Always looking for the best in everyone she encountered and in all circumstances, Peggy embodied the Julian of Norwich quote she would often share, “All shall be well, and all shall be well, and all manner of things shall be well.” Late in her life, Peggy would finish each night with a simple prayer, “God make us better servants, show us how to serve you better. Amen”

The family wishes to express their deep gratitude to Dr. Samantha Goodman and the many caregivers that loved and helped Peggy. Memorials may be made to the Episcopal Church of the Heavenly Rest, Hendrick Hospice Care, West Texas Rehab Center, or to a favorite charity.

To order memorial trees or send flowers to the family in memory of Peggy Beckham, please visit our flower store.