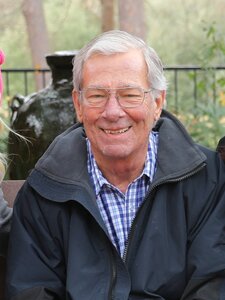 Patrick Conner, 84, passed away Monday, August 8th, 2022, in Abilene, Texas peacefully with family by his side.

Patrick was born May 8, 1938, in Palo Alto, CA to Bill and Kay Conner. He graduated from Antioch College in Southern Ohio. After college he went to work for Merrill Lynch where he would stay until he retired in 2006.

Patrick married Patricia Fallon in 1960 and they had 2 children, Hadley and Ken. They divorced in 1976.  Patrick moved to Washington, DC where he met his second wife, Carol. They married in 1982 and had a daughter together, Kelly, and shortly after moved to Stamford, Connecticut. Patrick officially retired in 2006. After retirement, he was able to pursue formal training in line with his love of gardening by joining the Master Gardener program in Stamford.  A few years after the passing of his 2nd wife in 2011, Patrick moved to Abilene Texas to live near his son. He continued his love of horticulture by joining the Master Gardener program there.

Patrick is survived by his daughter Hadley Conner (Kevin Moore), his son Ken Conner (Dawnyel Luckie) and his youngest daughter Kelly Conner, his brother Tim (Donna) Conner and many grandchildren, nieces, and nephews plus his first great-grandchild. All whom he loved dearly.

He was preceded in death by his wife Carol Conner (Noone), his parents Bill and Kay Conner and brother Mike Conner and sister-in-law Claire Conner.

Patrick was an easy-going soul, who loved gardening, music and an occasional martini – very dry!

The family will have a small private memorial and ask that in lieu of flowers, donations be made toward a memorial bench at the Bartlett Arboretum in Stamford, Connecticut. https://www.bartlettarboretum.org/give (please make sure on the give form to select in memory of Patrick Conner) or checks can be mailed to: Bartlett Arboretum c/o Patrick Conner Memorial, 151 Brookdale Road, Stamford, CT 06903.

To order memorial trees or send flowers to the family in memory of Patrick Conner, please visit our flower store.