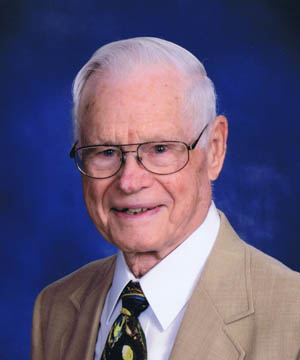 Obie was born in Parker County, Texas to Obie Eugene Maddux, Sr., and Emma Freeman Maddux on May 21 1924.  He went to school in Millsap.  He helped his father in his brick making business before joining the army and fighting in World War II, where he was issued the World War II Victory Ribbon the Good Conduct Medal, the EAME Theater Ribbon and two Bronze Service Stars.  Obie was also a sharpshooter with a rifle.  Obie fought in Normandy and Northern France.

Following the war, he met the love of his life Nell Simpson, whom he married on September 18, 1946.  Obie and Nell settled in Pecos, Texas, where he worked as a mechanic for several businesses before opening A-1 Motors, which he opened and operated until he retired.

Obie spent many years in the Pecos Volunteer Fire Department, one of his many passions.  During his time at the department he served as Assistant Chief and rarely missed a fire.  Obie was also member of First Baptist Church, where he helped with the media department in the church.  Another of his passions was playing golf.  Often taking vacations to Cloudcroft, NM, to play on their golf course.  Obie also loved boating with family and friends.  An avid skier, he taught his children to ski.

Obie’s greatest passion was his family – Nell, his son Harold, His daughter Tressa, and his daughter Barbara, fondly known as Barbie.

Obie was preceded in death and will be met in Heaven by his wife Nell, his parents Obie Maddux, Sr. and Emma Maddux, his son Harold and wife Supani, his brother Arvil and wife Barbara, his sister Bonnie Wester, and sister-in-law Bernice Maddux.

To order memorial trees or send flowers to the family in memory of Obie Maddux, please visit our flower store.