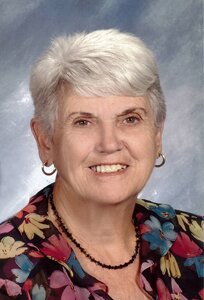 Neta Jean Carmack Reese, 91, of Abilene, Texas, went to be with her Lord Jesus on Sunday, October 3rd, 2021 after a short illness.

Neta was born in Comanche County on Easter Sunday, April 20th, 1930 to William Lee Carmack and Effie Jane Davis Carmack.  She was the youngest child of her family. She grew up in the small town of Sidney, Texas outside of Comanche where she graduated in a class of 16 from Sidney High School in 1948.  Although a small community school and a small graduating class, the friendships and memories were huge.  She shared memories of playing basketball, walking down country roads, and living modestly but with plenty to eat and a loving home.  She served her class as Class Secretary and also was voted “Most Beautiful” in her senior class.  Not only did they see her beauty on the outside, but it was clear she was a beautiful person overall. She told stories of her time working at Perry’s Five & Dime Store in Comanche, as well as the local drug store as a soda jerk at the lunch counter.

On July 23rd, 1950, she married a local boy, U.V. Reese, in Comanche, Texas.  They moved to Abilene, Texas in 1955.  Neta went to work in the medical office at St. Ann’s Catholic Hospital, followed by 8 years with Dr. O.E. Harper.  She then was blessed to work with Dr. Donald McDonald, local pediatrician for 17 years as his office manager until his retirement.  Later she served as office manager for Dr. B.R. Harrison until her retirement.  During her work with physicians and patients, she made life-long relationships.  She was available for any questions that patients had, and always made a point to take care and understand their concerns to the best of her ability.  It was very common for her to give her home phone number to the patients, and each call that came in was greeted with kindness and compassion.  Family members of Dr. McDonald commented that if it had not been for Neta, he would not have practiced as long as he did. Anyone that we speak to that knew our mama in the medical community said they could not have made it through without her kindness and sweet heart. Even up until her passing, no one could believe that she was her age due to her sharp wit, energy and fun spirit! If anyone could get something done, she was the one to do it- - where there was a will, there was a way!  Besides being a “get it done” person, she was also a wonderful cook, evidenced by her delicious coconut cream pies, chocolate pies and much, much more!

Our mama, Neta, and our daddy, U.V. were clearly best friends.  Upon his passing, they had been married 66 wonderful years.  When you would see one, you would see the other.  They worked side by side in everything that they did.  They enjoyed working on the family farm, caring for their cows, donkeys, and llamas. They also enjoyed growing vegetables in their garden for themselves as well as selling at the local Farmers’ Market on occasion.  Renovating rental property and being landlords was also a skill they both learned after retirement. They were always said to be the best landlords in town.  Of course, they were always actively involved in all events that related to their children and grandchildren.  Whether it was attending sporting events and music concerts, serving as school student sponsors, or working at school events, they only needed to know what time to be there, and they were there.  No event was complete without the two of them in attendance.  They were a joy to all who met them!

Neta and U.V. were long-time members of University Baptist Church and Lytle South Baptist Church where they served in any activity asked of them.  They enjoyed serving others and were hosts above and beyond.

Neta was preceded in death by her husband, U.V., in August 2016.  Also preceding her in death were her brothers, Manuel, Herman, and Stanley and her sisters, Bonnie Gilliam, Hazel Moore, Eulene Coan, and Lavern Hornsby, as well as extended family members.

To order memorial trees or send flowers to the family in memory of Neta Jean Carmack Reese, please visit our flower store.