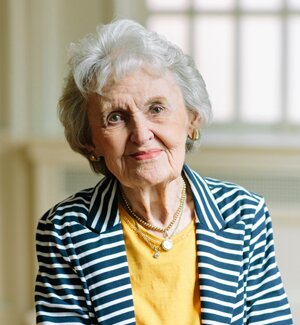 Mary Len Swinney passed away peacefully at her home on Monday, December 6th, with the same grace and dignity with which she lived her life.

Mary Len was born in Abilene, Texas at Hendrick Medical Center on May 11, 1930 to Willie Sula (Sutton) Smith and H. Len Smith. She graduated from Abilene High School and received a degree from Hardin-Simmons University.

Mary Len accepted the proposal of George H. Swinney, Jr. and they were married on March 8, 1953 at First Baptist Church in Abilene. Immediately after they wed, the couple moved to Jacksonville, FL where George was a Navy pilot in the Hurricane Hunter Squadron. During their time in Florida, Mary Len gave birth to Kay, who was their only child.

After George’s military service, Mary Len and George moved back to Abilene where she resided for the rest of her life, except a brief period when they lived in Marlin, TX. A few years after returning to Abilene from the Navy, the couple opened a gift shop named Gamut which was in downtown Abilene, adjacent to Swinney Glass and Paint. They custom designed and lived in two different homes in Abilene, with Mary Len’s classic taste no doubt creating special places to host family and friends.

Mary Len dedicated time to many causes in the community and was an active member of St. Paul United Methodist Church. The years were filled with friends she adored – enjoying activities such as live theatre, Philharmonic concerts, dance clubs, Sunday night poker, mahjong and bridge - accumulating master points. Mary Len and George spent their 57 years together traveling the country and the world, even more after his retirement. However, there was no place she enjoyed more than Red River, New Mexico, hiking in the mountains among the golden aspen (while George fished the streams) and gathering pine cones, but always with a watchful eye.  She dreamed of spotting a bear in the wild. Several were seen on nightly “bear hunts”, but always from the safety of a car!! She passed along her love of Red River to Kay, granddaughter Sabrina and most recently her great-granddaughter Chloe.

Mary Len is survived by her daughter, Kay Spiva and son-in-law Randy, of Abilene, TX; granddaughter Sabrina Herrmann and husband Ben Herrmann and great-granddaughters Chloe and Olivia Herrmann, all of Oklahoma City, OK.  She was preceded in death by her parents, her husband and many very dear friends.

A memorial service will be held at 3:00 p.m. Tuesday, December 21, at Hamil Family Funeral Home Chapel, 6449 Buffalo Gap Road in Abilene. A celebration reception will be hosted by the family from 4:00-5:30 p.m. at the Abilene Country Club, 4039 S. Treadaway. In lieu of flowers, the family suggests memorial gifts to Ben Richey Boys Ranch, Meals on Wheels, St. Paul UMC or the West Texas Rehabilitation Center.

To order memorial trees or send flowers to the family in memory of Mary Len Swinney, please visit our flower store.