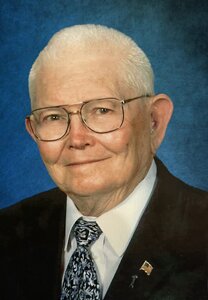 Funeral services will be at 10:00 am on Thursday, December 1, 2022 at Hamil Family Funeral Home, 6449 Buffalo Gap Road, with Dr. Jeff Reid and Dr. John Whitten officiating. Graveside services will be held at 3:00 pm at Crowell Cemetery in Crowell, Texas with Dr. Travis Craver officiating. The family will receive friends at Hamil Family Funeral Home at 9:00 am Thursday, prior to the 10:00 am service.

Martin was born in Thalia, Texas to Ava Ella McNair Jones and Joe Carroll (J.C.) Jones on February 25, 1926. He graduated from Thalia Consolidated High School in 1943. As an eighteen year old, he enlisted to serve his country in World War II with Company “L” 330th Regiment of the 83rd Division Army Infantry. His first day of combat was on his 19th birthday in February of 1945. He served 17 months, finishing out his tour with the Army of Occupation in Germany. For his service, he was awarded the Bronze Star, along with Good Conduct Medal, Combat Infantryman’s Badge, Army of Occupation Medal, World War ll Victory Medal, two Overseas Service Bars and the Honorable Service Lapel Button.

After the war, he met and married the love of his life, Xena Yvonne McClain, on March 8, 1947 in Crowell Texas. He worked throughout the years as a Gulf distributor, bookkeeper, grocerman and loved spending time working on his farm in Foard County. He was a master yard man and always had the best lawn on the block. Martin was a man who was known for his love of the Lord and commitment to his family. He worshiped and served as a deacon in First Baptist Crowell, First Baptist Hale Center and Pioneer Drive Baptist Church in Abilene.

Martin is survived by his three daughters, Deborah Wilder and her husband Ken of San Antonio, Carolyn Abbott of Abilene and Angie Wiley and her husband Rob of Abilene. He was dearly loved by his grandchildren, Amy Fox, Molly Fox, Laura Doughty, Luke Abbott, Kristen Martinez, Marcus Wiley and Elizabeth Wiley. He was able to touch the lives of six great-grandkids, Hayden, Rossi, Easton, Wiley, Logan and Mila. He was also a beloved uncle to numerous nieces and nephews.

Memorials may be given to Hendrick Hospice in Abilene

The family of Martin Jones wishes to extend our sincere thanks to the loving caregivers at Windcrest units 2 & 4, dedicated hospice nurses and doctors at Hendrick Hospice, and the caring members of Visiting Angels for the excellent care and love they showed to Martin.

To order memorial trees or send flowers to the family in memory of Martin Frank Jones, please visit our flower store.