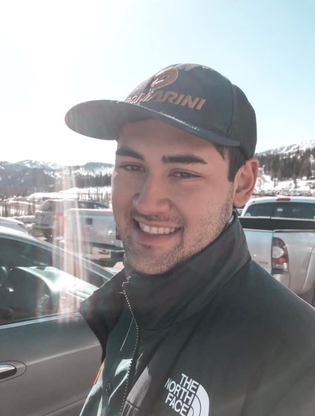 Mark Burrow, 24, of Abilene Texas, died May 1, 2021 as a result of injuries sustained when hit by a vehicle involving a drunk driver. We know that Mark is now safe in the arms of our Lord and Savior in our forever Heavenly Home.

Mark was born in Abilene, Texas to Janet Margiotta Holder and Tommy Burrow on October 3, 1996.  Mark loved spending time with his family and friends.  He had a special bond with his two younger brothers, Nick and Zack, whom he loved dearly. He developed lifelong friends at an early age, especially while playing baseball at Dixie Little League and with his travel baseball teams. Many weekends were spent traveling with his baseball family.  Mark was a 2015 graduate of Abilene High where he also played baseball.  He was named All-District Second Baseman.  Mark was an amazing athlete and an incredible competitor.  In 2017, Mark attended dealer school in Las Vegas and worked as a Craps Dealer for a year.  He then came back to Abilene and earned his Associate’s Degree from Cisco Jr. College and transferred to Texas Tech to pursue a degree in Physics.

Mark was blessed with a heart of gold. He was there for anyone that needed a friend.  To know Mark was to love him.

Funeral services will be held at 10:30 AM Thursday, May 6th at Broadview Baptist Church in Abilene, Texas with David Cason and Wes Terry officiating.  Burial will follow at Elmwood Cemetery on Hwy 277.  Services are under the direction of The Hamil Family Funeral Home, 6449 Buffalo Gap Road.  Visitation will be 6:00-8:00 PM on Wednesday, May 5th at The Hamil Family Funeral Home.

In lieu of flowers family asks that you donate to Broadview Baptist Church or to the National Institute of Mental Health (NIMH).

The family wishes to extend their sincere thanks to all of you for your support and prayers during this very difficult time.

To order memorial trees or send flowers to the family in memory of Mark Burrow, please visit our flower store.