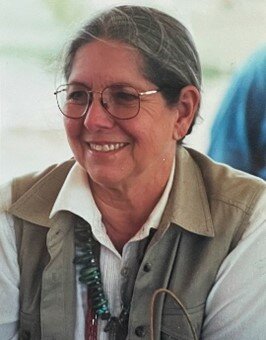 Marilyn was born in Big Spring, Texas to Mary Beth and Repps Bedford Guitar Sr., on November 4, 1933. Marilyn and her three other siblings attended schools in Big Spring until 1949 when the Guitar family moved to Abilene. Marilyn spent her senior year attending Abilene High School where she met her late husband William “Bill” Edward Galusha. After graduating from high school at age 16, Marilyn attended Columbia College of Missouri, a private college in Columbia. Marilyn and Bill were married in 1950 and began raising a family of six boys and three girls.  They resided in Casper WY, Odessa, Abilene, and ended up in Clyde, TX.  While in Clyde, Marilyn bred Pembroke Welch Corgis under her breeder’s name, Countdown Corgis. She was very delighted as a breeder when one of her Corgis won Best of Working Group and runner-up for Best in Show at the Westminster Dog Show in New York City. They moved to Boulder Colorado in 1969, and for the first time she worked outside the house. She was employed at Neodata Services, owned by A.C. Nielsen and then Dun and Bradstreet, in the mailroom opening the mail. Marilyn had a very successful 19-year career with Neodata services, a magazine fulfillment company that managed over 250 million subscribers from 400 magazines worldwide. Working her way up the chain to managerial positions she became the first woman to be promoted to Vice-President of Production encompassing USA, England, and Ireland operations with over 4000 employees under her. Over the course of her lifetime Marilyn attended McMurry College in Abilene, Texas and then the University of Colorado in Boulder in pursuit of a degree in Mathematics.

Marilyn retired at the age of 58 and set out to pursue her lifelong hobby of riding her 16.2 hands hunter-jumper thoroughbred, named “Hearts”. In 1988 both Marilyn and her husband “Bill” moved to Washington on the Brazos near Brenham, Texas where they purchased a ranch and raised Hereford cattle. They sold that ranch and purchased Lytle Gap Ranch just outside of Abilene, Texas in 1995, where they resided and raised cattle until moving into Abilene in 2002.  She was also President of the Guitar Water Group, L.L.C. that successfully fought to defend the water rights of all Texans to the water under their land by winning a hard-fought battle between speculators and ranchers by a Texas Supreme Court vote of “9 to 0” in 2005.

Marilyn was a volunteer with the Abilene Opera and held various duties in support of their chapter.  Starting in her 80’s she learned to quilt and made all her kids quilts. A Presbyterian, she loved the Lord and attended various churches in Abilene.

Pallbearers will be her sons Jim Galusha, Scott Galusha, Dr. Repps Galusha, Richard Galusha, and her grandsons Rob Galusha and Will Galusha.

Memorials may be given to Hendrick Home for Children or a charity of the donor’s choice.

To order memorial trees or send flowers to the family in memory of Marilyn Guitar Galusha, please visit our flower store.