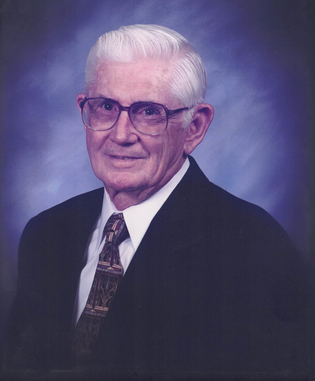 M.E. “Randy” Randolph, 99, of Abilene, passed away on Friday, August 28, 2020 in Abilene. Visitation will be from 6-8 p.m. Sunday, August 30, 2020 at The Hamil Family Funeral Home, 6449 Buffalo Gap Road. Funeral services will be held at 10:30 a.m. Monday, August 31, 2020 at the Broadview Baptist Church with David Cason and Wes Terry, officiating. Interment will follow in the Elliott-Hamil Garden of Memories under the direction of The Hamil Family Funeral Home. Randy was born on September 28, 1920 in Palestine, Texas to the late Buren and Ollie (Harper) Randolph. He graduated from Eula High School and attended Hardin Simmons University. He and Ruth Howe were married on December 26, 1940 in El Paso, Texas. She preceded him in death on October 17, 1998. Randy owned and operated Randy’s Fabric and Upholstery in Abilene for 30 years as well as served as a Baptist Minister for many years. Before the war began, he joined the Horse Calvary at Fort Bliss. Later he served in the US Army during World War II. He loved playing dominos and spending time with his family. Randy was a member of the Broadview Baptist Church and a resident of Abilene most of his life. Randy is survived by two daughters, Charlotte Faircloth and Sandra Burrow and husband Jerry all of Abilene; three grandchildren, Jimmy Faircloth, Tony Burrow and Tommy Burrow; and five great grandchildren, Mark Burrow, Nick Burrow, Zack Burrow, Willie Wise and Amanda Wise; a host of nieces, nephews and friends. Pallbearers will be Tony Burrow, Tommy Burrow, Jimmy Faircloth, Cliff Edge, Chad Bramlet and Lance Deal. Family suggests memorials may be made to Broadview Baptist Church, 2500 S 27th Street Abilene, Texas 79605, Meals on Wheels, 717 N 10th Street, Abilene, TX 79601 or Hospice of the Big Country, 4601 Hartford, Abilene, Texas 79605.
To order memorial trees or send flowers to the family in memory of M. E. Randolph, please visit our flower store.