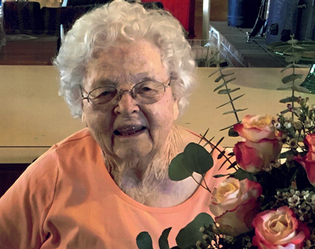 LaVerne Bowles Coalson passed away January 9, 2020, at the age of 97 at her home in Potosi, Texas. Visitation will be held Friday, January 17, from 5 pm until 7 pm at The Hamil Family Funeral Home, 6449 Buffalo Gap Rd. Funeral services will be held at 2:00 P.M. on Saturday, January 18th at The Hamil Family Funeral Home Chapel. Burial will follow at Elmwood Memorial Park Cemetery at 5750 U.S. Highway 277 South. LaVerne was born in Abilene, Texas to Alfred and Jewel Bowles on January 26, 1922. She graduated from Wylie High School and Abilene Christian College with a BA in Education. She married Bill Coalson on June 2, 1940, in Abilene. For 32 years, she was a devoted 3rd grade teacher in the Abilene Independent School System. After retirement, she was an active member of Highway 36 Church of Christ. LaVerne was preceded in death by her parents, Alfred and Jewel Bowles; sister, Yolanda Briggs; brother, Dixon Bowles; and son Doug Coalson. LaVerne is survived by her daughter, Glo Coalson; grandson, Britt Coalson; grandson, Dane Coalson and wife, Rebecca, and their sons David and Alex; and granddaughter, Piper Coalson. Memorials may be given to Meals on Wheels, 717 N. 10th, Abilene, TX 79601. Online condolences may be submitted at www.hamilfamilyfuneralhome.com.
To order memorial trees or send flowers to the family in memory of LaVerne Bowles Coalson, please visit our flower store.