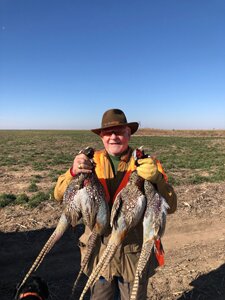 Larry was born on June 4th, 1942, in Cleburne, Texas, to Curtis and Janette Godfrey.  His father was a prominent Soil Scientist and Professor at Texas A&M University, so Larry attended public schools in College Station, Texas.  Larry was a baseball player, musician, and class clown, which attracted the adoration of his high school sweetheart and wife of 61 years, Judy Rasmussen Godfrey.

Larry’s favorite story about College Station (verified by his mother and friends) was his mid-1950s encounter with Elvis Presley.  Elvis was not famous yet and played one-night gigs around Texas.  After playing the G. Rollie White Coliseum at Texas A&M, some young teens hung around Elvis’ pink and white Cadillac convertible.  With a buzz haircut, Larry seized the opportunity to get Elvis’s signature, but with nothing in hand, Elvis signed the top of his head.

In high school, Larry played the drums with a western band.  On New Year’s Eve, 1959, his band played at the Abilene Country Club, where, coincidentally, he would spend the last 25 years of his life playing golf. Ultimately, music brought Larry and Judy together through the high school marching band, where Larry was a drummer, and Judy was the drum major.

After graduating high school in 1960, Larry graduated from Texas Christian University and became a lifetime Horned Frog fan.  After attending TCU, he received a master’s degree in International Affairs from Ohio State University.

Larry entered the Air Force in July 1963, initiating a 20-year career in Intelligence, although he often joked that “he always looked for Military Intelligence but never found it!”  Larry served before, during, and after the Vietnam War.  One of his favorite tours was serving as an Exchange Officer Royal Air Force for two years in England.

Throughout the years, Larry and Judy traveled the world together while raising their three children, Alan and twins Kathryn and Lloyd. They brought him great joy, many laughs, and memories, especially when hunting and fishing.   He was immensely proud of their many accomplishments. One great joy in his life was his ‘Grand,’ Lu, whom he loved and supported throughout a successful battle with cystic fibrosis.  He often reminisced about his favorite dogs: Ramsey, Kacey, and Breezy.

After he retired from the military, Larry worked at Centenary College, Shreveport, in the Registrar’s Office and later in Abilene at Abilene Christian University, where he became Assistant Registrar.  He was happiest in the wheat fields of Kansas hunting pheasants with a good bird dog and enjoying a round with his golfing buddies as an ever-optimistic high handicapper.  Larry also enjoyed playing in the Canterbury Bell Choir at Church for 24 years.

Larry loved his country, always patriotic and respectful.  His faith deepened at the Episcopal Church of the Heavenly Rest under the guidance of Bishop Scott Mayer and, recently, Reverend David Romanik.

The family thanks Rev. David Romanik and Rev. Corrie Cabes for their exceptional pastoral care.  Larry spent much time with his life-long friend from elementary school and Friday Mexican lunch buddy Ellis Smith.  Bill Wright was his favorite book and bridge partner.  All church friends, neighbors, and golfers lovingly supported Larry through these last few weeks.

A memorial service will be held at 2:00 pm on Saturday, September 17th, at the Episcopal Church of the Heavenly Rest with Father David Romanik officiating.  Military honors will be held outside in the Columbarium.  A reception will be held immediately following at Gerhart Hall.

Instead of flowers, Memorials may be made to the Episcopal Church of the Heavenly Rest, Abilene, The Grace Museum in Abilene, and TEAM LU Cystic Fibrosis https://give.cff.org/north-texas/donate?rbref=homepage

The service will be livestreamed and seen at:  heavenlyrestabilene.org/watch

To order memorial trees or send flowers to the family in memory of Larry Godfrey, please visit our flower store.

Columbarium Of The Church Of The Heavenly Rest, Episcopal