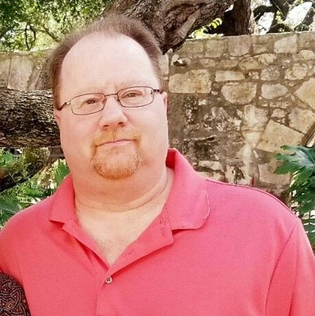 Larry William Brake, 58, left this life unexpectedly on November 6, 2019 at his home. Larry was born on November 7, 1960 to George and Marilyn Tackett in Kokoma, Indiana. Larry's family then moved to Van Buren, Indiana where Larry attended and graduated from Eastbrook High School. Larry moved to Abilene, Texas in 1982 where his oldest brother was stationed at Dyess Air Force Base. Larry spent most of his adult life helping and serving others. He retired from Hendrick Medical Center serving 26 years as a security officer and was currently working for the Taylor County Sherriff Department. He was a member of St. Vincent Catholic Church. It was at Hendrick's that Larry met the love of his life Adela Orona. They were married January 18, 2001 in Abilene. Adela brought into their marriage two sons, Cruz and James Orona who Larry loved very much. Larry had such compassion for people and the kindes and biggest heart, and when he laughed you could not help but want to laugh as well. Every day before he would leave his home, he made sure to tell Adela that he loved her. Larry is survived by his wife Adela of Abilene, Texas, his sons Cruz Orona (Kristii) of Fort Worth, Texas, James Orona of Fort Worth, Texas. His grandchildren, Cruz R. Orona III, Brittny Lynn Sillers, Tabatha Joann Sillers, Jordan Christine Orona, Mycayla Christdon Orona, Des,Maryah Orona. Grandchildren, Zoi Orona & Jaxton Palmer. He is also survived by his two older brothers Robert Lee Brake (Joni) of Abilene, Texas and Floyd Brake of Terre Haute, Indiana. As well as several nieces and nephews and extended family. Larry was preceded in death by his parents. Visitation will be Monday, November 11, 2019 from 5:00 to 7:00 P.M. with a Rosary beginning at 7:00 P.M. at The Hamil Family Funeral Home, 6449 Buffalo Gap Road, Abilene. A funeral Mass will be at St. Vincent Catholic Church 2525 Westview Drive, Abilene, Tx at 2:00 P.M. on Tuesday, November 12, 2019. Pallbearers will be Robert Brake, Sr., James Orona, Robert Brake Jr., Adrian Moya, Carlos Hernandez and Patrick Brake. The family would like to express their appreciation to the Abilene Police Department and Judge Sparky Dean for their compassion and support during this very difficult time, as well as the support of the Taylor County Sherriff's department. "I gave you my love, You can only guess how much you gave me happiness
To order memorial trees or send flowers to the family in memory of Larry William Brake, please visit our flower store.