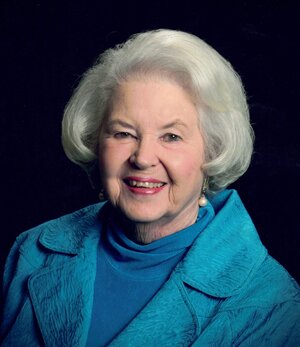 For more than six decades, Lale Murrey Estes was one of the brightest lights to ever shine in Abilene. That light dimmed on Thursday, May 26, 2022, when she died peacefully at home.  Lale, 89, wife of the late Dr. B.J. Estes, was part of a remarkable couple who enriched our city and its people in every possible way.

Funeral services will be held on Friday, June 3, 2022 at 10 am at First Central Presbyterian Church, 400 Orange Street in Abilene.

Lale was born in Chicago on August 31, 1932, but grew up in Franklin, Tennessee.  Her dad called her “Happy” due to her easy, good nature – qualities she retained her entire life.  Later, her older sister Betty named her “Skippy”, the name she had for an imaginary friend.  “Skip” was a beloved nickname that stuck, used by close friends, family, and especially B.J.

While attending Ward-Belmont College in Nashville, she had a blind date with a Vanderbilt University man from Texas and met the love of her life.  She and B.J. married in her grandmother’s Nashville home and then headed to Houston where B.J. attended medical school and completed an internship in family medicine.

In 1957, the young couple – with their first child Frank in tow – moved to Abilene.  This young Southern belle brought her infectious charm and charisma to the West Texas frontier, and we were forever changed.  B.J. was a busy family doctor, caring for families’ physical needs, while Lale was just as busy caring for their emotional needs.  She was the first to arrive with a meal, at times of illness and loss, and visited more hospital rooms than the clergy.  With her ever-present smile and wonderful humor (also known as the Murrey wit!), she lifted spirits and restored hope.  She always had the right words which sounded all the better with her Southern lilt.

Lale was also a part of people’s lives in the happy times.  She celebrated weddings, babies, graduations, achievements – even when it meant traveling out of town to do it.  She was the friend who was always there, no matter what or where.  She had the ability to make each person feel special and infinitely loved, a gift that comes from a heart that is always open and big enough for everyone.

In a day when our communication is too often texts and emails, Lale continued to send the most beautiful handwritten notes.  Her penmanship remained impeccable and the sentiments expressed were precious. These masterpieces are most likely among the most treasured mementos of the fortunate recipients.

Lale was active in local organizations, including the Taylor-Jones County Medical Auxiliary and the Junior League of Abilene, and she was a devoted member of the First Central Presbyterian Church where in recent years she volunteered in the food pantry and had the daunting task of arranging the family bereavement meals for the services.  While she gave immensely to others and her community, Lale was devoted to her three children and their activities – athletics, scouting, performances and school events.  She gladly welcomed their friends for planned or impromptu gatherings, and most of the time she was the life of the party!  She was there for it all and was happy – and able -- to carry a “double load” when B.J. was caught at the hospital or with an emergency.

In later years, Lale became a board member for a family foundation in Tennessee that her late sister and husband established.  Their children, Currey Thornton and Lester Turner, asked Lale to be part of T&T Family Foundation that annually makes money available for charitable donations.  Lale used her funds for Abilene -- character statues for the The Adamson-Spalding Storybook Garden at the Civic Center, the Children’s Art and Literacy Festival, the National Center for Children’s Illustrated Literature, the Boys and Girls Club and Abilene Zoo among many others.  The Community Foundation of Abilene assisted Lale is directing her donations.  It was her greatest joy to help children and contribute to the community that she graced – and embraced -- for 65 years.

Lale and B.J. traveled extensively with friends – Europe, Hawaii, Israel, Australia, New Zealand and Tahiti.  They saw the summer Olympics in Barcelona and the winter games in Calgary.  They went scuba diving in the Caribbean, spent many fall Saturdays at Texas Longhorn football games and enjoyed summers at their Cisco lake house.  They belonged to dinner clubs and a dance club, despite B.J.’s two left feet.  They were invited to every event, big and small, and they brightened every room.  They were known and loved by everyone.

Lale enjoyed entertaining and was a wonderful cook, with a vast collection of recipes and cookbooks that reflect her culinary curiosity and accomplishments.  She grew beautiful geraniums in her greenhouse on Elmwood, a home she and B.J. built and loved until their move into a home at Wesley Court.  She adored cats and two stand out -- Hobbs who ruled the roost on Elmwood and had a portrait commissioned in his honor, and Lily Belle who was always the incentive for Lale to return home from recent stays in the hospital.

A rare honor was bestowed on Lale recently when she – and her late husband – were named Outstanding Citizens of the Year by the Abilene Chamber of Commerce.  This annual award usually goes to an individual, but it is only fitting that these two were recognized together.  They were a perfect tandem of determination, dedication and achievement.  Together, they literally did it all and leave this town – and world – much better than they found it.

Lale’s light will continue to shine in this community for generations to come.  Her gifts to the community will be enjoyed, her investment in lives will inspire others to do the same and her memory will continue to lift spirits and hearts on the darkest days.  Thank you, dear Father, for the gift of this incredible woman and for the opportunity to share her journey.

B.J., her husband of 67 years, died in 2020.  Survivors include three children:  Frank Estes and wife Bonnie; Janet Garrison and husband John; and Kenneth Estes and wife Tammy.  Grandchildren include Baylor Estes, Jaxon Estes, Benjamin Estes, Michael Garrison and wife Alexandra, and Lyndsey Garrison Tatum and husband Mark, and Kristal Boyd.  Great grandchildren include Caleb Tomlinson and Baby Boy Tatum due in July.  Extended family are Bobbie and Tommy Estes of Abilene, Barbara and Win McCombs of Fort Worth, Currey Thornton and Lester Turner of Nashville, and numerous nieces and nephews.

Special thanks to our “Dream Team” of caregivers who with love and kindness helped Lale – and the family – through these last months.  They are Angie Rondot. Alexis Currin, Wanda Banks, Maria Berry, Pearl Jamison, Brittany Verastegui and Shannon McCree.

In lieu of flowers, memorials may be made to the Community Foundation of Abilene, the National Center for Children’s Illustrated Literature, Hendrick Hospice of Abilene, First Central Presbyterian Church or the charity of your choosing.

P.S.  We are grateful to Tennessee for sending two of their best – Davy Crocket, for his bravery and heroics at the Alamo and Lale Murrey Estes, for bringing gentility and joy to the West Texas frontier.  Crocket said it and apparently Lale agreed: “You may all go to hell, but I’m going to Texas!”

To order memorial trees or send flowers to the family in memory of Lale Estes, please visit our flower store.