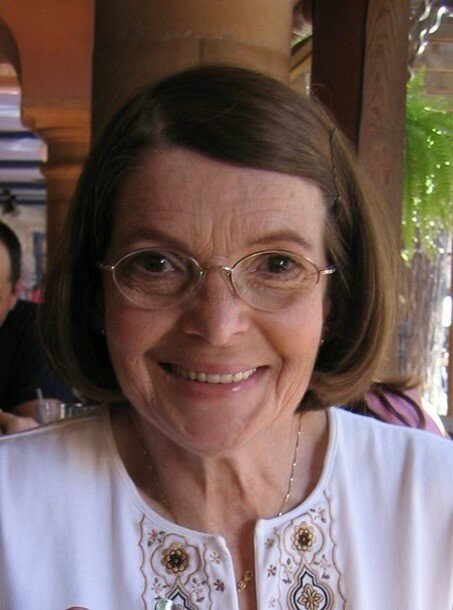 There are people in this world that just make life a little sweeter. Janet Miller Woody was one of those people.

Janet Miller Woody, 74, went to her heavenly home on Wednesday, March 30, 2022.  Janet was born January 24, 1948 to the late August Miller and Ezma May Zerns Cole in Muskegon, Michigan. She was an extremely hard worker, often working two shifts at Mrs Baird’s Bread to support her family. Janet met Albert ‘Al’ Woody in 1980 and they married, at 13,000 feet in the air, on May 7, 1983 in Abilene. She and Al enjoyed spending time together and loved watching movies in the comfort of their recliners. The Voice and Autumn in New York were two of her favorites. Believe it or not, Janet would sometimes finish an entire bag of M&Ms while watching. She loved her sweets; especially her dipped cones from Dairy Queen!

Janet enjoyed leisurely drives, playing Bingo and going antique shopping. Whether a treasure she found while antiquing or a momento from a place she had visited, Janet could tell you a story about every piece in her China cabinet. One of her most special gifts she ever received was her iPad. She could spend hours going through pictures she had saved remembering the moments and cherishing the memories. Her family will always remember her texts every morning and evening wishing a good day or a good sleep. Janets texts would always include the outside temperature and precipitation predictions for Abilene, along with her plan for the day. Her messages were usually sent during or immediately after swinging with her favorite sidekicks, Roxy and Smokey, and were often accompanied by a photo or selfie. No matter what, every conversation, either text or voice, ended with “I love you bunches honey!“ And she truly did!

Janet loved her grandchildren so much and always wanted to know what they were doing, the sport they were playing, the grades they were making, and how much they had grown. She was such a proud mother, grandmother, and great-grandmother.

She was preceded in death by her parents, Ezma May and Theodore ‘Toddy’ Wilson Cole; her father, August Miller; and infant son, Brandon Lee Draper.

A celebration of Janet’s beautiful life will be held at 3 pm on Tuesday, April 5, 2022 at The Hamil Family Funeral Home, 6449 Buffalo Gap Road, in Abilene with Pastor David Cason officiating.

Memorial contributions may be made to a charity of the donors choice.

There are people in this world that just make life a little sweeter. Janet was one of those people.

To order memorial trees or send flowers to the family in memory of Janet Ann Woody, please visit our flower store.