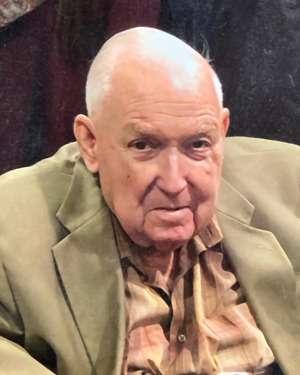 Funeral Services will be held at 2pm on Friday January 27, 2023 at Pioneer Drive Baptist Church, John Whitten of Pioneer Drive Baptist and Gerald Hobson a close friend will officiate. Burial will follow at the Vinson Family Cemetery near his home. Services are under the direction of Hamil Family Funeral Home, 6449 Buffalo Gap Road.

Dub was born in Runnels County to Herman and Katy Vinson on November 1, 1933. He went to school in South Taylor County and graduated from what is now known as Jim Ned High School. He married Monty James and this past June 21st they celebrated 69 years of marriage. They were married in the yard of Pastor Wilson Estes at 1642 Ross Street Abilene, TX.

After high school Dub left the farm and went to the oil field for work. From there he was drafted into the Army and deployed to Korea for 2 years. Upon being discharged from the Army he went back to the oil field only for a short stay before applying to be a fire fighter for the City of Abilene, where he remained for 9 years. While being a fire fighter, to better himself and family, Dub and Monty soon got into the laundromat and car wash business, which lead to several locations around Abilene. Always looking for new projects, Dub found the need to purchase land and go back to the farm in South Taylor County. The land ownership leads him to purchase of The Farm and Ranch Feed store and the Abilene Downtown Grain Elevator. This last move provided Dub and Monty a long and successful career helping farmers and ranchers with fertilizer, feed and seed in the Big Country. Having changed the name to Abilene Ag Service & Supply it today remains one of the few remaining independent agricultural retailers in the state of Texas.

Dub served on several Boards and committees, including the Taylor County Ag Committee, and the Tuscola and Security State Bank Boards. He was also on the Board and Chairman of the Taylor County Expo where he was involved in the West Texas Fair and Rodeo. It was while serving the Fair and Rodeo that he, with help from others, started the Calf Scramble for the kids of the Big County. His awards include being named the 2011 Outstanding Conservation Farmer by the Middle Clear Fork Soil and Water Conservation District and named “Man of the Year” by Texas County Ag Agents Association in 2003. However, his accomplishments could not have been achieved without the love and support of his lifelong mate Monty. They certainly worked side by side for all these years.

Dub was an avid fisherman, loved raising great crops and cattle and always was the farmers and ranchers biggest advocate. One of his friends and business associate recently wrote “Dub was one of the smartest and honest men I have ever known, he will never be forgotten”.

He was proceeded in death by his parents, brother Don Vinson and daughter in law Elaine Vinson. He is survived by his wife Monty Vinson, two sons Lanny and Randy and one sister Kathy Smith of Austin. Dub was also very proud of his grandchildren, Jessica Garcia and her husband Ricky of Houston, TX., Ross Vinson, Michael Vinson both of Abilene, TX. Also included are Mary Katherine Flanagan and her husband Garrett as well as Zane Vinson and wife Heather both of Abilene, TX. Dub and Monty were recently blessed with a great grandson Grant who is the son of Jessica and Ricky.

In lieu of flowers contributions can be made to Hendrick Hospice 1651 Pine St Abilene, Tx 79601

To order memorial trees or send flowers to the family in memory of Dub Vinson, please visit our flower store.