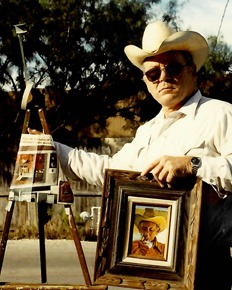 A native of Texas, Glen Rose McKelvy, Jr. was born in Albany on March 25, 1937, to Dott Lofland McKelvy and Glen Rose McKelvy, Sr. Glen lived in Albany, TX, Washingotn, DC, Waco, TX, San Antonio, TX, Arkansas, and Abilene, TX. In February of 1956, Glen was discharged from the US Navy.

Even at the age of six, Glen was already drawing. Glen considered himself a realist painter. He came form a long line of artistic talent, his father and grandfather both showed an inclination toward drawing. Glen's formal training was at Hunter's Art School in San Antonio. Glen earned acclaim in numerous art shows and was recognized for his talents in Arkansas as well as Texas. One of his paintings was displayed for years in the office of the then governor of Arkansas, Governor Orval E. Faubus - now it is in a historical museum in Arkansas. In the summer of 2007, Glen retired.

Glen was the youngest of four children. Preceding him in death were his parents, and a brother, John.

He is survived by his two sisters, Frances Emory (Raleigh, NC) and Anne Ziegler (Dayton, OH), as well as several nieces, nephews, and cousins.