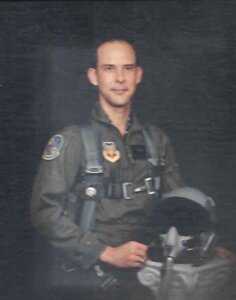 A memorial service celebrating Garry’s life will be held on August 19, 2022 at The Hamil Family Funeral Home at 6449 Buffalo Gap Road in Abilene, TX at 2 pm.  His ashes are to be spread at a later time over the Galveston coast as he requested.

Garry was born on the Island of Galveston to William W. and Helen Rogers on 12 June 1953.  He graduated from LaMarque High School. After graduation Garry joined the United States Air Force and later was selected for Officer Training School and graduated from SouthWest Texas State University in San Marcos, TX.

In October 1974 he married Leslie Ann Vicchio and had two children, Graham and Skye.

He was appointed to work as an Intel Officer out of college but was then selected for flight training, ultimately spending the majority of his career as a Weapons System Officer flying the F-4 Phantom II.

In 1983, after a battle with cancer, Garry lost his first wife Leslie leaving behind their two young children.

During a tour of duty in the Philippines, he married Sandra Hitchcock nee Ernst in 1986, bringing Meredith, another child to the family.

Garry was preceded in death by his first wife, Leslie; his parents William Walter and Helen Rogers nee Stokr; and his brother, Bill Rogers.

Memorials may be given to Tunnel to Towers Foundation.  The family of Garry wish to extend our sincere thanks to the Hendrick Health staff friends and relatives that have been so quick to offer help.

To order memorial trees or send flowers to the family in memory of Garry Gregory Rogers, please visit our flower store.