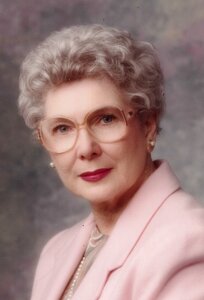 Evelyn Willoughby Bein, 93, of Abilene, Texas passed away on January 27, 2022 at Hendrick Hospice Care.  Services will be held this Saturday, February 5, at 2:00 pm at The Episcopal Church of the Heavenly Rest followed by a reception in Gerhart Hall.

Evelyn was born August 27, 1928 in Abilene Texas to Rexford and Evelyn Willoughby.  She attended Abilene High School and Lindenwood College in St. Louis, Missouri.  While living in Germany with her family who was stationed there, she met and married the love of her life, Robert K. Bein. Their first date was a military dance, and it was love at first sight. They were married three months later. For their entire marriage, Evelyn was the absolute definition of an Army officer’s wife.  Family always came first. She especially treasured her time with her grandsons, especially while they were growing up.  Her passions were her church and her relationship with Jesus who she loved above all else and the Abilene Women’s Club where she was past President and a member of multiple committees. She also enjoyed working crossword puzzles, watching Jeopardy and classic movies, opera, and painting.

At Heavenly Rest Episcopal Church, she was a member of the Altar Guild, the Linen Care Committee, the Board of the Women of the Church, Hospitality Chair and was the primary guide for the history of the church. She also spent many hours volunteering at The Thrift House, a mission of Heavenly Rest.

Evelyn was preceded in death by her parents and her husband.

Evelyn is survived by her son, Robert Karl II and his wife Rachael of Abilene and her daughter Priscilla Patrick and her husband Greg of Byhalia, MS.  She is also survived by her two grandsons, Karl Bein of Austin and Erich Bein of Mesquite.

Honorary pallbearers are the members of the Abilene Woman’s Club.

The family asks that memorials be made to The Church of the Heavenly Rest, the Abilene Woman’s Club, or to your favorite charity.  Also, the family wishes to express our sincere gratitude to the doctors, nurses and staff members of Hendrick Hospital, Encompass Rehabilitation Hospital and Hendrick Hospice Care for all that they did throughout this process.

To order memorial trees or send flowers to the family in memory of Evelyn Bein, please visit our flower store.

Church Of The Heavenly Rest, Epsicopal