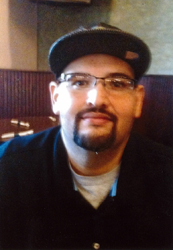 Eric was born in Jefferson, Oregon to Vera (Rodriguez) and Benjamin Yzaguirre on May 31, 1977. He graduated from Canyon High School in New Braunfels, Texas and had also completed his certification in HVAC service technician. He had previously been employed at Lowe’s of Abilene. Eric was a member of New Hope Church.

Eric was preceded in death by his father.

To order memorial trees or send flowers to the family in memory of Eric Gabriel Yzaguirre, please visit our flower store.