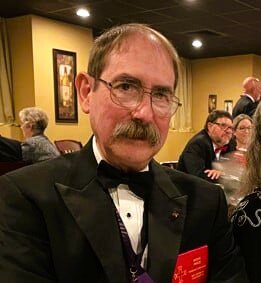 Douglas Alan “Doug” Price died with his beloved dog by his side on Thursday, September 1, 2022.

Doug was born to Phyllis Nadine (Stark) and Donald Hall Price in Wichita, Kansas on October 16, 1954. Doug grew up in Humboldt, Kansas. His first love was the University of Kansas in Lawrence where he earned his B.A. and J.D. degrees and damaged his hearing in Allen Fieldhouse. He was a lifelong KU basketball fanatic. Doug married Teresa Price on August 11, 1989. He taught Political Science at McMurry University and retired from the 132nd Judicial District Probation Department in Snyder, Texas in 2016. He truly enjoyed being retired.

When not busy with Masonic activities, Doug was an avid nonfiction reader especially history. He liked to cook and was a founding member of the Big Country Homebrewers Association.

Doug was preceded in death by his parents. He is survived by his wife, Teresa; his stepson, Matthew West and wife Stephanie, and their son; sister, Donna O’Keefe and husband Tim of Joplin, Missouri; brother-in-law, David Davis and wife Kathy of Wichita, Kansas; nieces, nephews, friends, and Tex.

Memorials may be made to the Salvation Army or the charity of your choice.

To order memorial trees or send flowers to the family in memory of Doug Price, please visit our flower store.