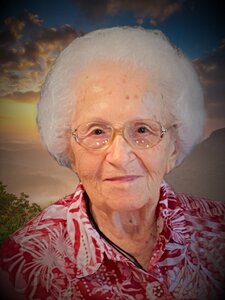 Visitation will be Saturday, February 19 from 5:00-7:00 pm at The Hamil Family Funeral Home, 6449 Buffalo Gap Road. Committal services will be held at 1:00 pm on Tuesday, February 22 at the Texas State Veterans Cemetery at Abilene, 7457 W. Lake Road. Scott Oldenburgh will be officiating.

She lived in Norton until she was two years old, then the family moved eight miles west of Happy, TX. They moved to Happy for her first year of school, then moved back to the farm. Dorothy went to country school in Jowell, four miles north of the farm. She walked and rode a horse to school until 7th grade. She graduated from Happy High School in 1942, where she played clarinet in the Uncle Sam Band.

After graduation, she worked for Heard & Jones Drug in Tulia until she met the love of her life in Amarillo. Dorothy married Charles Clifton Finley on February 10, 1946. He went to Adak, Alaska for the Army Air Corp – where she remained in Happy with her parents. They moved to a farm in Loraine in 1947, and remained in Loraine until 1992. They built a marina at Lake Ivie, and built her dream home in Ballinger. Charles died December 12, 2011. Dorothy then moved to Mesa Springs retirement Village in February of 2012.

She was preceded in death by her mother and father, husband Charles, brother Wayne, sister Muriel, and granddaughter Alicia.

Dorothy is survived by her sons Gary and wife Margie, Ronnie and wife Jerri, Robert Dale and wife Debbie, David and wife Nina, and very special friends Betty Pena and Kay Smith. She also leaves behind 10 grandchildren, 16 great-grandchildren, and one great-great grandchild.

In lieu of flowers donations may be made to West Texas Rehab.

To order memorial trees or send flowers to the family in memory of Dorothy Mae Cope Finley, please visit our flower store.