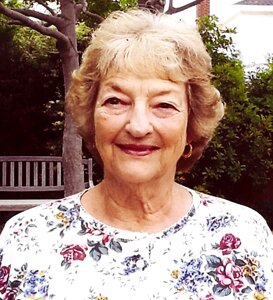 Doris was born in Gorman, Texas to Naughty Emore (N.E.) Graham and Effie Lucille (Evans) Graham on December 5, 1939. She grew up in the Sidney community in Comanche County, Texas and graduated from Sidney High School.

Doris married Clinton Dale McKee on June 9, 1959, in Sidney, Texas. They lived in Comanche, and she worked at Choice Baking Company until Dale joined the Air Force. They were stationed at Chanute AFB in Illinois, Ramstein AFB in Germany, and Dyess AFB in Abilene where they made their home. Doris was a stay-at-home Mom until the children were school age and then went to work at the Abilene State School. She worked there for 26 years and was a dental assistant.

After Willard's death, Doris moved back to her home in Abilene. She was a member of Wylie Methodist Church and active in Sunday School and Ladies Bible Study Groups. On Mondays she could be found volunteering at Glenda's Second Edition, a resale shop at the Abilene State Supported Living Center. Doris loved a pretty yard and up until her health declined she could be found zipping around on her riding lawnmower at full speed. Her house was the one with the beautiful bluebonnet patch in the springtime.

Doris was preceded in death by her parents, her first husband, Dale McKee, and second husband, Willard Partin.

She is survived by a daughter, Donna (McKee) Gist and husband David; a son, Rickey McKee and wife Jennifer (their children Stephanie Langford, Amanda Daniel and husband Jenus, Dalton McKee, Colton McKee, and Samuel McKee). Also by four step-sons, Dan Partin and wife Susanne, Cliff Partin and wife Pam, Clark Partin, Mike Partin and wife Sarah along with all their children and grandchildren. She is also survived by a brother, Gayle Graham and wife LaRea, a sister-in-law, Shirley Scott and a brother-in-law, Joe McKee as well as step grandchildren Billy Furman and Becky Furman and her nieces and nephews.

In lieu of flowers, donations may be given to Hospice of the Big Country, Priddy Baptist Church, or Wylie Methodist Church.

The family wishes to extend our sincere gratitude to Hospice of the Big Country, the kind and caring staff at Lyndale Memory Center (especially Loni who could always make her smile), Dr. Ezekiel Duke and Nurse Sonnie, Dr. Hari Kalla and Nurse Ann, and Noe Silva, PT.

To order memorial trees or send flowers to the family in memory of Doris McKee Partin, please visit our flower store.