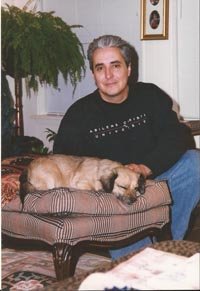 David M. Gonzalez, 57, of Abilene passed away on July 28, 2019 in the comfort of his own home where he resided in Abilene, Texas.

David was born in Lake Charles, Louisiana to Homero Agusto Gonzalez and Jacqueline Rowe Gonzalez on November 14, 1961. He went to school in Abilene, Texas where he graduated from Abilene Christian University in 1995. He worked as a social worker for Child Protective Services for 15 years before retiring in 2015. David was an avid reader, a talented photographer, a music enthusiast, and enjoyed riding motorcycles. He lived by a simple quote that he shared often with his daughter by John Stuart Mill in which he stated, “He who lets the world, or his own portion of it, choose his plan of life for him, has no need of any other faculty than the ape-like one of imitation. He who chooses his plan for himself, employs all his faculties. He must use observation to see, discrimination to decide, and when he has firmness and self-control, to bold to his deliberate decision.” David lived by this philosophy and used it to pave his path in life. He thought for himself, chose what he wanted to do, and chose what he wanted to be. He exercised every unique capacity given to him by living life on his own terms until the very end. By doing so, he chose to be himself.

Cremation services are under the direction of The Hamil Family Funeral Home.

To order memorial trees or send flowers to the family in memory of David Marcos Gonzalez, please visit our flower store.