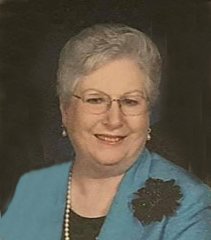 Corrine Shields, 88 years, finished her earthly life on Saturday, August 14, 2021 in Abilene, Texas.  She was born on July 20, 1933 in Floydada, Texas. Her parents were Stanford Cook and Edith Bird Cook.  The family moved to Virginia when Corrine was six months old and remained there until she was nine years old.

Amarillo, TX was where Corrine graduated from high school in 1951.  She then enrolled in Wayland College the next fall.  In addition to getting her BA from Wayland, she acquired a husband, by the name of James L. Shields who preceded her in death on June 3, 2020.  They married on August 16, 1953 at First Baptist Church in Amarillo, TX.  She graduated from Wayland in 1955 and became an elementary art teacher for the Fort Worth Independent School District, where she taught for five years.  She then taught a year in Greenville and took a year off to obtain her Masters in Library Science.  She returned to Fort Worth to help start library services in twelve schools.  The couple then moved to Brownwood, TX in 1963.  She worked at the state school and filled in at Howard Payne College library. In 1967, daughter Cindy was born and then a son, Jerry, in 1970. She later became the reference librarian and then head librarian at HPU in 1981.  The family moved to Abilene, TX, in 1984 where she worked for Region 14 Service Center as a library consultant for rural areas.  In 1988, she became the Associate Director of University Libraries at Sid Richardson Library at Hardin Simmons University until her retirement in 1995.

Throughout her life, she enjoyed serving as a Sunday school teacher, for the old and young.  She was very involved in missions, serving as a Girls in Action leader, working in women’s missions groups and providing meals at City Light Ministries.  She was a very caring wife, loving mother and a wonderful grandmother.  James and Corrine had a partnership beyond words.  That third strand was always there, and they supported and loved each other with a very special love for almost 67 years.

Corrine is survived by her daughter, Cindy and husband Michael DeJulio of Montrose, CO; granddaughter, MichaelAnn DeJulio Black and husband Eric of Roxborough, CO, great-grand daughter Charlotte Ann (Charlie) whom she met through Facetime; grandson, Johnse DeJulio, who headquarters in Montrose, CO; son Jerry Shields and wife Kay, with sons Caleb and Clayton of Colorado City, TX.  She also leaves behind her sister, Ann Chafin of Oakhill, WV, her sisters-in-law, Lona Howard of Brownwood and JoBeth Shields of Tyler, and several nephews, nieces and a few cousins.

She was preceded in death by her parents, her husband, her sister Barbara Taylor and three brother in-laws, Bob Shields, Everett Chafin and C.V. Howard.

Her life verse was “Trust in the Lord with all your heart and do not lean on your own understanding. In all your ways acknowledge Him, and he will make your paths straight.” Proverbs 3:5-6 NASB.  That is exactly what she did.

Funeral services will be held at 10:00 am on Thursday, August 19, 2021 in the First Baptist Church Sanctuary, 1333 North 3rd, Abilene.  Family visitation and a time of fellowship with friends will follow the service.  Graveside services will also be held on Thursday, August 19th at 4:00 pm in the Riverside Cemetery in Byers, Texas. Services are under the direction of The Hamil Family Funeral Home, 6449 Buffalo Gap Road, Abilene.

To order memorial trees or send flowers to the family in memory of Corrine Shields, please visit our flower store.