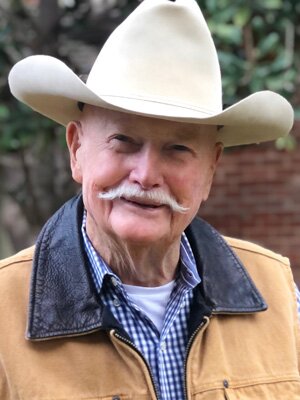 Bill was born in Tulsa, Oklahoma to Lucille and Earnest Rhyan on November 9, 1931.  He graduated from Oklahoma State University in 1954 and began his career as a commissioned officer in the United States Army.  He continued his education by completing his master’s degree in Public Administration from Shippensburg University and an additional master’s degree in Strategic Studies from the acclaimed US Army War College.

After many years of training and thousands of flight hours, Bill earned the prestigious designation of Master Aviator, flying both helicopters and fixed-wing aircraft.  He served two tours of duty in Vietnam and later commanded the 145th Army Aviation Battalion. Bill was awarded the Legion of Merit, Bronze Star, Meritorious Service Medal, and many other commendations.  He retired from the US Army in 1981.

Bill met the love of his life, Tamara (“Tami”) Essley, while he was working as a bag boy at his father’s grocery store.  Later, he went to work on Tami’s family ranch.  They were married in 1957 and were blessed with 4 children and 57 happy years together.  Tami was a steadfast presence and support for him until she proceeded him in death on February 5, 2015.

Bill and Tami moved to Abilene in 2006 and quickly became active members of the community.  Together they found a church home at St. Paul’s UMC, joined the Assembly Club, and became involved in serving the Abilene Philharmonic.  Bill was also a member of The Abilene Speaker’s Club and served as a Docent at Frontier Texas.  He fit right in with his signature mustache as he gave many tours to area school children.

“Daddy Bill” will forever be a beloved hero to his children and grandchildren.  He will be truly and deeply missed by his family and his many friends.

The family would like to thank Bill’s special helpers and friends who have loved and supported him.

Visitation will be Thursday, June 2nd, from 6-8 pm at the home of Jeff and Susan Braaten, 1314 Elmwood Drive.  Funeral services will be held at 12:30 pm, Friday, June 3rd at St. Paul’s United Methodist Church, 525 Beech Street, with his grandsons, Stephen Miller and Parker Lattimer officiating.  A full military burial will follow at Texas State Veterans Cemetery, 7457 West Lake Road.  Services are under the direction of The Hamil Family Funeral Home, 6449 Buffalo Gap Road.