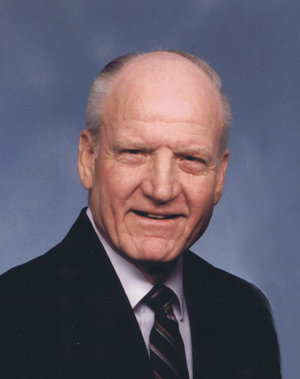 Clarence Edward Tucker 97, went to see Jesus, his wife, and daughter on Thursday April 29, 2021. He was born in Hamlin, Texas on November 15th, 1923 and later moved to a farm outside Anson where he grew up and went to school. Clarence loved Math and was a tennis doubles champion at Anson High School.

After graduating, Clarence worked for Rips Food Store and later Musser Lumber Company, until on February 16, 1943, when Clarence entered active service into the Army.  He served as a clerk/typist and then moved into Company A 27th Tank Battalion as a medium Tank Driver transferring to the European Theater behind the front lines until the end of WWII. He separated from the Army at Fort Bliss, Texas with an Honorable Discharge on February 14, 1946.

Upon returning back to Anson, Clarence decided to move to Abilene and attend Draughon’s Business College to learn bookkeeping/accounting, eventually working for Brown and Brown (B & B) Food Stores for six years.

After leaving B & B, he went to work for Edgar Davis who was a local rancher, cattle feeder, and self-made oil man. Clarence was Mr. Davis’s Office manager and head accountant. Following the death of Mr. Davis, Clarence went to work for the West Texas Rehabilitation Center (WTRC) June 1st, 1974.  Around this time is when Clarence and Jean began purchasing duplexes to rent, eventually accumulating 13 properties in Abilene.

On July 27th, 1994 Clarence received a 20-year Appreciation Recognition for his dedicated and loyal service to the WTRC.  It was noted on the plaque that his duties as Comptroller were carried out quietly, his ability to work well with the entire staff was commended and his pleasant humor brought joy to the workplace. Clarence was also recognized by the Abilene Rotary Club in November 1994 because of having practiced high ethical standards and vocational excellence as Comptroller of WTRC.

Clarence retired from the Rehab Center on November 13th, 1995 and continued helping Jean with their rental properties.

While the community of Abilene celebrated many of his accomplishments and gifts, above all, Clarence was a Christian, loving husband and father with a great sense of humor.  He enjoyed being with people.

Visitation will be Tuesday May 4th, 2021at the Hamil Family Funeral Home, 6449 Buffalo Gap Road, Abilene from 5pm – 7pm. A graveside service will be at 11:00am on Wednesday May 5th, 2021 at Elmwood Memorial Park Cemetery.  A memorial service will be at 2:00pm at First Baptist Church, 1333 North Third, Abilene.  The church service at 2:00pm will be live streamed off the church website at www.fbcabilene.org and click on watch now.

In lieu of flowers, the family graciously requests that donations be made to WTRC, Lyndale Abilene, Lyndale Memory Care or charity of choice in memory of Clarence Edward Tucker.

To order memorial trees or send flowers to the family in memory of Clarence Edward Tucker, please visit our flower store.