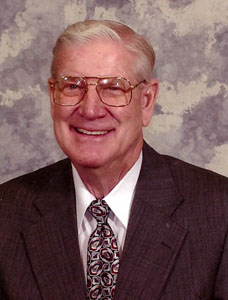 Charlie R. Merrell, age 92, of Abilene, died Tuesday, November 10, 2020. A graveside service will be held 11 am Friday, November 13 at Elmwood Memorial Park with Rev. Mike Woodard officiating. Mr. Merrell was born in Corsicana, TX on August 16, 1928 to Curtis and Etta Merrell. He was a resident of Abilene for 40 years – since 1970. He was a member of Southwest Park Baptist Church. Charlie served in the Merchant Marines for a short time at the end of World War II. He worked for Interstate Theatres, Mead Foods, Inc., and Harris Acoustics, all in management and accounting. He was preceded in death by his parents Curtis and Etta Merrell, and sister Ada Elizabeth Luter. Charlie is survived by his wife Janis; brother, Wayne Merrell of Arlington, TX; two daughters, Valla Ray Merrell of Albuquerque, NM and Janet Sue Jensen of Abilene; one son, David Edwin Merrell of Wichita Falls, TX; as well as five grandchildren, 12 great-grandchildren, two great-great-grandchildren, and many other relatives and friends. In lieu of flowers, memorials may be made to Southwest Park Baptist Church or the Salvation Army.
To order memorial trees or send flowers to the family in memory of Charlie Ray Merrell, please visit our flower store.