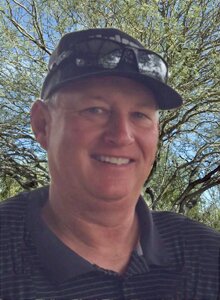 Carrol Dale Johnson, age 52 of Tuscola, Texas was called home by his Lord and Savior on Monday, October 18, 2021, in Abilene, Texas.

Funeral services will be held at 11 am on Friday, October 22, 2021, at The Hamil Family Funeral Home with burial to follow at Buffalo Gap Cemetery.

Carrol was born in Sweetwater, Texas to Albert Lee “Butch” Johnson III and Rebecca Sue Johnson (Green).  He grew up in Sweetwater but graduated high school in Burkburnett, Texas.  Carrol married Tamara Hill on November 27, 1996, in Abilene, Texas and together they had 3 children: son Zachary Dale, son Cade Rilee, and daughter Caleigh Rae.  He was a Master Electrician and owner of J J Electric.  Carrol, along with his family, attended Beltway Park Church.

Carrol had a passion for drag racing and enjoyed spending time at the track with his Big Country Race Way family racing his yellow Chevy Luv truck, dragster, and prized Fain mint green Ford Ranchero.  He loved spending his time having cook outs with his friends and family, hunting, fishing, and watching baseball and football games.  Carrol’s favorite sport was any and everything Cade and Caleigh were participating in.  He loved nothing more than coaching them, and along with Tammy being at all their events cheering for them.

Carrol was preceded in death by his grandparents A.L. and Joyce Johnson and Charlie Tyson, and infant son Zachary.

Carrol is survived by his wife Tammy, son Cade, and daughter Caleigh.  He is also survived by his sister Kimberley Yarbrough of Abilene, sister Brooke Haygood of Weatherford, parents Butch Johnson and wife Tina of Tuscola and Becky Green of Abilene, grandmother Ann Tyson of Abilene, and numerous nephews, nieces, aunts, uncles, cousins, and countless friends who became his family.

To order memorial trees or send flowers to the family in memory of Carrol Dale Johnson, please visit our flower store.