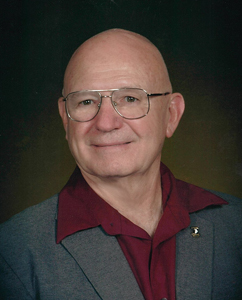 Funeral services will be held Saturday, January 14, at 2:00 pm at St. Paul United Methodist Church with Bob Monk and Benji Van Fleet officiating. A reception will follow at the church for all who would like to join in celebration of Bill's life. Visitation will be at The Hamil Family Funeral Home on Friday, January 13, from 5:00 to 7:00 pm. Bill will be laid to rest alongside his wife, Amy, at Arlington National Cemetery in Washington, D.C., later this year. Services in Abilene are under the direction of The Hamil Family Funeral Home, 6449 Buffalo Gap Rd.

Bill was born in Barnsdall, Oklahoma to Iva Leona Clapp and Lewis Libby on April 10, 1937. He was the third of four children and was valedictorian of Skelly Grade School before attending and graduating early from Dumas High School. He then attended Texas A&M University where he played the French horn in the Fighting Texas Aggie Band and became the Chaplain of the Band and the Corps Chaplain in his senior year. He obtained his Master of Divinity from Drew Theological Seminary, where he met and later married Amelia Ann Dunkle on September 9, 1961 in Wilmington, Delaware. Bill also obtained an M.A. in American Diplomatic Studies from Kansas State University. He worked towards a Ph.D. in American Studies from the University of Maryland but chose not to complete this program when his wife was diagnosed with cancer.

Shortly following their wedding, Bill and Amy began their worldly adventure together on their first assignment at Fort Bliss, followed soon thereafter by assignment in Dachau, Germany. Bill served in the United States Army for 30 years, advancing to the rank of Colonel, and serving soldiers and their families around the world as a Methodist Chaplain, teacher, mentor, coach, and guide. Bill served in Vietnam and was awarded the Bronze Star with a V for Valor, for his ministry to soldiers during combat. He served with the 101st Airborne Division and was present during the Tet Offensive and battle of Hue. An Associated Press photo of Bill conducting a field funeral after Hue was featured in books about the Tet Offensive as well as in the Ken Burns documentary film about Vietnam.

During his military career, his family moved frequently, from Kansas to New Jersey to California and back to Germany with stints in several other locations as well. His last assignment was teaching Ethics and History at the National Defense University in Washington, D.C. Following his military retirement, he returned to the Northwest Texas conference of the United Methodist Church as Associate Pastor at St. Paul United Methodist Church where he remained an active member until his death. He took a brief assignment at Plum Street UMC in Abilene during this period. While at St. Paul, Bill founded and led an active Sunday School class, the Pathfinders, comprised mostly of Vietnam-era veterans, their spouses, and others who wanted to be part of Bill's ongoing ministry to Veterans and their families.

Bill's second career was as a professor and coach at McMurry University, beginning in 1991. During his 20-year tenure, he was frequently ranked the favorite and "most influential" faculty/staff member by graduating students. Bill was an avid marathon runner himself and founded and endowed the cross-country running program at McMurry. He also held the position of Athletic Director for a short time. Bill was always present at McMurry games in all sports, both at home and away, enjoying traveling with students on the team busses all around the American Southwest conference. Bill never missed a chance to support McMurry students and is remembered fondly by thousands for his Old Testament and History classes, refreshments he delivered to games, donations he made for uniforms and facility improvements, and countless hours of coaching and encouragement.

For years Bill participated in and led biblical and archaeological digs in Jordan, taking students and church members with him. He also led tours of the Holy Land for church and other people in Abilene. He hosted tours of John Wesley's London and taught the history of the founding of the United Methodist Church.

From 2005-2017, Bill co-hosted the radio show "The Professors" with Paul Fabrizio on KWKC.

Pallbearers will be members of the Pathfinders Sunday School class of St. Paul United Methodist Church.

In lieu of flowers, memorials may be made to benefit the Methodist Food Pantry of Abilene, the Methodist Minister's Retirement Fund, or McMurry University.

Memories may be shared and condolences submitted online at www.HamilFamilyFuneralHome.com.

To order memorial trees or send flowers to the family in memory of Billy Libby, please visit our flower store.