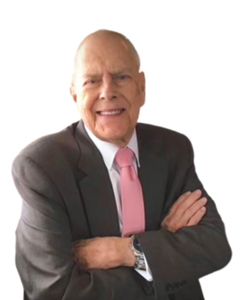 Born June 3, 1925, in Abilene, the son of the late Alesa Knight and George Dunigan Kiker, Bill was a 1943 graduate of Abilene High School and received his BBA degree from Hardin-Simmons University in 1951.  He married the former Bonibelle Lewis (now deceased) on June 10, 1952.

At Abilene High School, Bill excelled in football for the Eagles during all four years and was quoted as saying playing football prepared him for the stresses and rigors of World War II.  Bill served as an infantryman in the U.S. Army during World War II from 1944 to the war’s end in 1945; and then served as an MP with the Japanese Occupation Force until 1946. After his discharge from the Army, he accepted a direct commission in the Army Reserve.  He was recalled to active duty during the 1961-1962 Berlin Crisis and was stationed at Fort Gordon, Georgia.  Bill retired from the Army Reserve in 1969 as a Lieutenant Colonel.

Always an active churchman, Bill served as Vice Chairman and Secretary of the Board of Directors of First Baptist Church and was active in many church committees.  Not only was he on the original church committee for many years which implemented bus transportation for handicapped members and others in need of church assistance, but he was also active as a driver.  His late wife Bonnie and he were very active in the church’s youth ministries.

Bill is survived by his three sons and their families: Marion Lewis Kiker of Abilene; William George Kiker II and his wife Sherry of Austin; and John David Kiker and his husband Daniel Joseph Hulseberg of Lyme, CT, and New York City.  He is also survived by grandson William George Kiker III and his husband John Robert Link of Honolulu, and their two children Graham and Jasper.  Bill is also survived by numerous nieces and nephews, including Hal Hughes of Abilene, Susan Kratt of Montana, David Hughes of Oklahoma City, Robert Nash and Wayne Nash of Dallas, and Susan Nash and Linda Nash of Lubbock.

The family wishes to thank Marion Kiker, for being the family’s primary caretaker for both Bill and Bonnie in their later years; family friends and caretakers, Milena and Blake Kasper; Home Instead Services, for its dedicated crew of home care employees, including Yvette Long, Judith Napier, Consuelo Villegas and Jan Parris; Hospice of the Big Country; and Bill’s primary care physician, Dr. Samantha Goodman.

To order memorial trees or send flowers to the family in memory of Bill George Kiker, please visit our flower store.