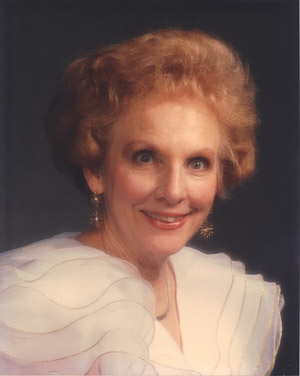 Barbara Joy Voit, 89, passed away on Tuesday, February 4, 2020. She was born in Corpus Christi, TX on January 8, 1931 to Jim and Peggy Daughtry. Barbara married George Stowbridge in 1951, raising five children. They enjoyed 34 years of marriage until his death in 1985. She remarried in 1993 to Louis Voit, a joyous union lasting 27 years. Barbara moved with her parents to California and graduated Hollywood High in 1947. She was living in Roswell, NM when she met Capt. Stowbridge and began her career as an Air Force wife, moving to Columbus, OH, Montgomery, AL, and finally Abilene, TX in 1959. She worked in real estate, then had a great career at Philpott Florist, where she matched ‘em, hatched ‘em, and dispatched ‘em (marriage, birth, and funeral). Her last employment was at Barnard’s Antiques in downtown Abilene. Barbara was a member of the Society for the Preservation of Quaint Old Homes and was active in the Abilene Preservation League during the reopening of the Paramount Theater. She served as president of the McMurry Women’s Club, and was a member of the Cactus Lions Club. At one time, she was president of the Abilene Quilters Guild. An avid quilter, she won many ribbons for her beautiful creations. She was a member of the ‘Thursday Quilters’, crafting quilts for the West Texas Rehabilitation Center auction every January. Barbara was preceded in death by her parents, her brother Bob and sister Betty. She is survived by her husband Lou, daughters Betty Beebe and Patty Gough, and sons Jim, Mike, and Bob, and six grandchildren, 11 great grandchildren, and one great-great grandchild. Visitation will be on Thursday, February 6, from 5 p.m. to 7 p.m. in the Staterooms at The Hamil Family Funeral Home, 6449 Buffalo Gap Rd with a Rosary following at 7 p.m. Funeral services will be 11:00 am on Friday, February 7, at Holy Family Catholic Church, 5410 Buffalo Gap Rd., with the interment following at Elmwood Memorial Park, 5750 US Highway 277 S, Abilene, TX.
To order memorial trees or send flowers to the family in memory of Barbara J. Voit, please visit our flower store.