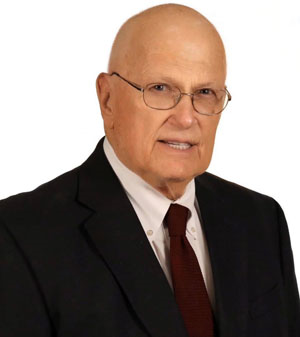 Arthur Leon Goolsbee passed away at home in Abilene on July 19, 2021.  He was born on February 19, 1940, in Waco, Texas, to William Harold and Josephine Nehring Goolsbee.

After graduation from Waco High in 1958, he joined the Marines and served four years as an air traffic controller.  He returned to Waco and entered Baylor University, where he participated in the debate team, Young Democrats, and Student Congress.  He also met his future wife, Linda Catherine Dean, of Fort Worth, and they were married in 1963.

Art graduated from the University of Texas Law School, and they moved back to Waco, where their son Austan was born.  Austan Goolsbee would be appointed to President Barack Obama's Council of Economic Advisors, later becoming Chairman.  He is now Professor at the University of Chicago Booth School of Business.

In 1971 the family moved to Los Angeles to join Art's brother in operating a national produce trucking company.  Art was later hired by Utility Trailor Manufacturing as Director of Finance and internal legal counsel until his retirement in 2004, when he and Linda moved to Abilene to be near her family.

Art's interest in contemporary art and architecture involved him in support groups for several museums in the Los Angeles area, with opportunities for study and travel.

In 1989 he had a heart attack and a five-bypass surgery. Doctors told him they expected him to live 10 years so he determined to make the most of it. He took up walking, then race walking, then running and even ended up running a marathon in the Humboldt Redwoods in 1991. With his efforts and the outstanding care of his doctors, he lived more than 30 more years—long enough to see his son start a family, get to know his three grandchildren and teach them to drive when they got old enough.

Art was an Associate of the Order of the Holy Cross at Mount Calvary Monastery, an Episcopal Benedictine Monastery in Santa Barbara.  He regularly attended long, silent retreats over the years.

In Abilene, Art began a Contemplative Prayer group at Episcopal Church of the Heavenly Rest, which has continued and includes participants from all denominations.  He was also involved with the church's community outreach program.  In 2008 the Reverend Arthur Goolsbee was ordained an Episcopal Deacon.

Art always kept an empathetic heart for the poor and powerless. In the nearly 17 years Art lived in Abilene, he has served the community as an Executive Board Member of United Way of Abilene, an Associate Municipal Court Judge, a Teen Court Judge and a volunteer at the State Supported Living Center.

Art was predeceased by his parents, his brother Harold Goolsbee, Jr., his sister Marilyn Goolsbee Barnes, his father- and mother-in-law Dr. Talmage W. "Jack" Dean and Frances Sibley Dean of Abilene.   He is survived by his wife Linda; son and daughter-in-law Austan and Robin Goolsbee; grandchildren Aden, Addison, and Emmett Goolsbee; and numerous brothers- and sisters-in-law, nieces, nephews and great-nephews and nieces whom he loved deeply.  He was surrounded by their love and support and blessed by their presence to the end.

A funeral service honoring Art will be held at 10:00 am on Monday, July 26, 2021 at the Episcopal Church of the Heavenly Rest.  Services are under the direction of The Hamil Family Funeral Home, 6449 Buffalo Gap Road.  Due to the recent surge in COVID the family requests all in attendance of Art’s funeral service wear mask and practice social distancing.

In lieu of flowers, contributions may be made in his memory to Episcopal Church of the Heavenly Rest Outreach Fund or United Way of Abilene.

To order memorial trees or send flowers to the family in memory of Arthur Leon Goolsbee, please visit our flower store.